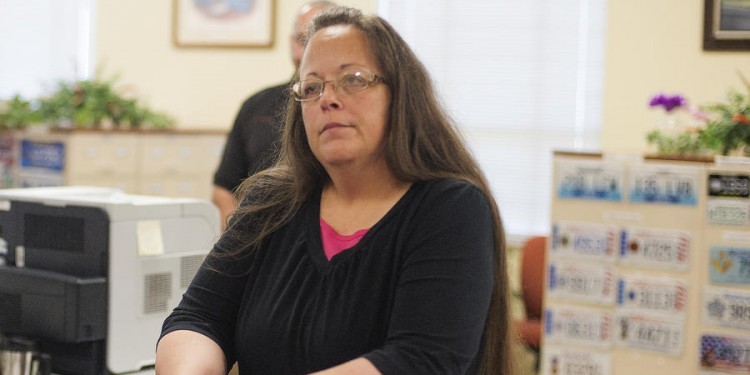 AUTHOR INTERVIEW: RYAN T. ANDERSON.  In response to the Kim Davis situation in Kentucky – the county clerk who denied marriage licences to same-sex couples, we interviewed Ryan T. Anderson – a rising star in the pro-traditional marriage movement and author of the new book Truth Overruled: The Future of Marriage and Religious Freedom.  This is one of the first books to tackle the now controversial Obergefell v. Hodges Supreme Court decision, which essentially laid out a legal road map for allowing same-sex marriage in the U.S.

Congratulations Ryan on your new book, Truth Overruled: The Future of Marriage and Religious Freedom!  Can you give us an overview of your book, and what was your inspiration in writing it?

I wrote this book for all Americans. For those who disagree with me, to at least understand my arguments. For those who agree, to better understand the nature of the debate and the reasons supporting the truth. For those undecided, to get one thoughtful take on what the future should hold.

I draw on the best of philosophy and social science to explain what marriage is, why it matters for public policy, and the consequences of its legal redefinition. I also explain why the Court’s ruling is a significant setback for all Americans who believe in the Constitution, the rule of law, democratic self-government, and marriage as the union of one man and one woman.

Already we are seeing attacks on religious liberty–predicated on the bogus equation of opposition to same-sex marriage with racism–and modest efforts in Indiana and other states to protect believers’ rights have been met with hysterics from media and corporate elites. I tell the stories of innocent citizens who have been coerced and penalized by the government, and I offer a strategy to protect the natural right of religious liberty.

I also report on the latest research on same-sex parenting, filling it out with the testimony of children raised by gays and lesbians. I conclude with a comprehensive roadmap on how to rebuild a culture of marriage, with work to be done by everyone.

What three takeaways would you like readers to leave with after reading your book?  And what direction do you see the marriage movement headed in light of the recent Supreme Court decision? 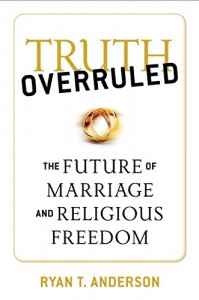 I hope the pro-marriage movement follows the example of the pro-life movement after Roe v. Wade. Here are three lessons.

Just as the pro-life movement successfully rejected Roe v. Wade and exposed its lies about unborn life and about the U.S. Constitution, we must make it clear to our fellow citizens that Obergefell v. Hodges does not tell the truth about marriage or about our Constitution. Nothing in the Constitution justifies the redefinition of marriage by judges.

Just as pro-lifers protected their rights not to pay for abortion or perform abortion, so too pro-marriage forces need to do the same: ensure that we have freedom from government coercion to lead our lives, rear our children, and operate our businesses and charities in accord with the truth about marriage. Likewise, we must ensure that the government does not discriminate against citizens or organizations because of their belief that marriage is the union of husband and wife.

Just as the pro-life movement did, we have to bear witness to the truth in a winsome and compelling way. We must employ reason to make the case for the truth about marriage, communicate this truth to our neighbors, and embody this truth in our families and communities.

Just as the pro-life movement discovered the effectiveness of ultrasound and letting women speak for themselves, the pro-marriage movement will, I predict, find the social science on marriage and parenting and voices of the victims of the sexual revolution to be particularly effective. And just as grassroots pregnancy centers exposed the lie that abortion is a compassionate response to unplanned pregnancy, we must show what a truly loving response is to same-sex attraction.

In light of the Kim Davis situation in Kentucky – the county clerk who objected to giving marriage licenses to same-sex couples, is she now, what some people are saying, the “Rosa Parks” of the Pro-Traditional Marriage movement?

I don’t know if I’d say that. In chapter 4 of Truth Overruled I tell the stories of a dozen people and institutions—bakers, florists, photographers, adoption agencies—who have been punished by the government for living out their conviction that marriage is the union of a man and a woman. Kim Davis is a symbol of what happens when political authorities can’t work together to find commonsense, win-win solutions to protect the rights of all parties involved.

Had the leaders of Kentucky wanted to, they could have ensured that all legally eligible couples received marriage licenses, but no clerk ever had to violate his or her conscience. The same thing is true for wedding cakes and wedding flowers. If we’re willing to work together, we can find a way to coexist peacefully. I tell how in Truth Overruled.