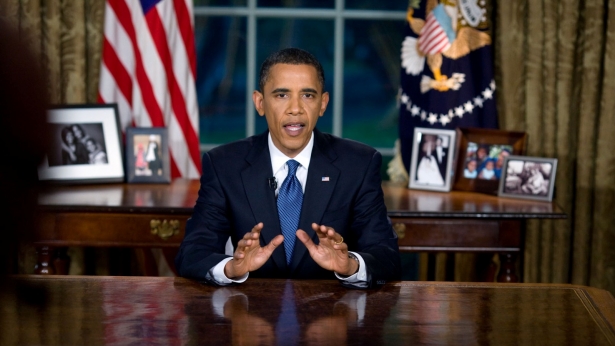 In a recent turn of events, President Obama was caught “plagiarizing” Neville Chamberlain’s infamous appeasement speech during his speech in the Oval Office on Sunday, December 6th. Chamberlain was the British Prime Minister at the beginning of WWII and is best known for his appeasement policies with Hitler to avoid conflict — eventually leading to Hitler’s invasion of Poland.

One could say Obama’s defense policy reflects Chamberlain’s policy of appeasement. But that may be giving him too much credit — at least Chamberlain had a “plan”, even if it was terrible. Maybe if we ignore ISIS they’ll go away? Yeah, very reassuring.

Good to know though that President Obama was able to make the Kennedy Awards last night. It was pivotal he was there as Commander-in-Chief. Everyone seems a lot more calm now. Nothing to worry about; they’ve got things “contained.”

Perhaps President Obama should take some speech advice from Peggy Noonan, President Reagan’s speechwriter, in her book, On Speaking Well.

Wonder what Winston Churchill would think of Obama’s speech, then read our Editor’s Pick of the Week, Churchill’s Trial, by Dr. Larry Arnn –  President of Hillsdale College.