Our Conservative Book Club Member of the Week is Timothy P. Carney, one of Washington’s rising star journalists with the Washington Examiner. He is also a fellow at the American Enterprise Institute helping direct AEI’s Culture of Competition Project, which examines barriers to competition in all areas of American life, from the economy to the world of ideas.

Carney has over a decade of experience as a journalist covering the intersection of politics and economics, and even got his start with the revered Bob Novak. He has also written two books including, Obamanomics: How Barack Obama is Bankrupting You and Enriching His Wall Street Friends Corporate Lobbyists, and Union Bosses and The Big Ripoff: How Big Business and Big Government Steal Your Money.

Tim is certainly influencing the national debate and we’re honored to have him as our feature CBC Member of the Week.

Congratulations Tim on being our Conservative Book Club “Member of the Week!” Tell us a little bit about yourself and the work you do as Senior Political Columnist at the Washington Examiner. What’s an average day like for you?

Recently, I’ve been travelling around Iowa and New Hampshire, covering both parties’ presidential races, which I love.

I write two columns a week for the Examiner, and I blog as much as possible. I’m also a visiting fellow at the American Enterprise Institute, so I keep very busy. I love it all, because I love writing, reporting, learning, and arguing—and that’s my job. 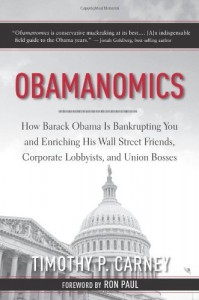 I did an internship at Human Events through the National Journalism Center before my Senior year at college—largely just because my brothers did NJC.

That internship turned into a job at Human Events after I graduated. Only after I was there for a few months did I realize journalism was my calling.

You’re also a visiting fellow at the prestigious American Enterprise Institute. What type of research are you doing for AEI?

At AEI, I do research and events on cronyism, human flourishing, and the moral aspects of economic policy.

Bob Novak was my boss for three years and a mentor. Gabriel Kolko is a socialist, and his Triumph of Conservatism was formative for me. Aristotle, Richard Weaver, and Robert Frost are other influential authors on me. I’m a Catholic, and the Church has brought along my thinking on many issues.