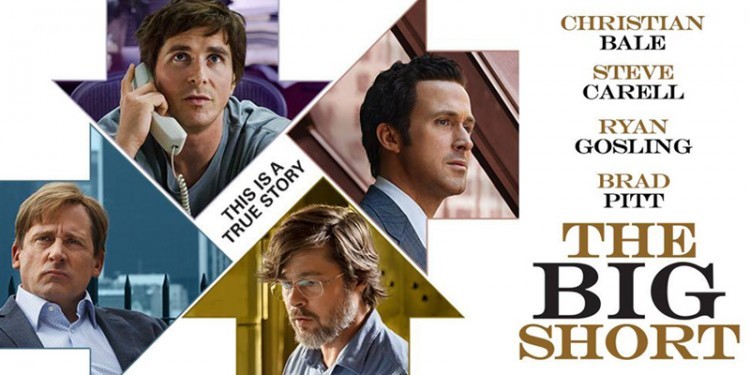 Adam McKay’s The Big Short has received five Oscar nominations, including one for Best Picture. There is no denying that his tale of the 2008 financial crisis is entertaining and well-crafted. It is important to note, however, that if there were a “Best Dodd-Frank Propaganda” Oscar, it would easily win. Wall Street financiers are hammered throughout the film, but lawmakers who engineered the housing bubble get a pass.

The Big Short is told through the point of view of wise-guy trader Jared Vennett (Ryan Gosling), who regularly breaks the fourth wall. The film simultaneously follows hedge fund manager Mark Baum (Steve Carell), eccentric Dr. Michael Burry (Christian Bale), and retired banker Ben Rickert (Brad Pitt), who mentors two upstart investors. The men know subprime mortgage loans are a ticking time-bomb for the U.S. economy, but are unsure if corrupt hands on the levers of power will allow them to profit off the discovery.

McKay makes the most of his stable of strong actors by giving them a script that makes credit-default swaps relevant to the manager at Target or the nurse atthe local hospital. Baum is an irascible jerk whose anger stems from seeing industry insiders screw over “the little guy.” Rickert is the film’s moral compass, who understands that treating people like mere numbers is a recipe for evil. Burry, who appears slightly autistic, is an honest man who finds himself bewildered by the depths of dishonesty within the system.

Since the task of making the U.S. Securities and Exchange Commission and mortgage conventions interesting is an arduous task, McKay impressively cuts away from the main story at times to highlight cameos by actress Margot Robbie, singer Selena Gomez, and chef Anthony Bourdain. Each celebrity breaks down one aspect of the housing collapse in ways that only they can. It’s a “spoonful of sugar helps the medicine go down” approach by the director that works well.

At the end of the day the question becomes: How does one review a movie on the housing bubble that never mentions the Community Reinvestment Act? Is The Big Short worth seeing if it ignores federal pressure on Freddie Mac and Fannie Mae to make risky loans? The answer is yes.

The Big Short is a good movie. Conservatives who are opposed to its one-sided message should see it to understand just how important popular culture is at shaping opinion. It would be great if more Americans read Mark Levin’s Liberty and Tyranny or Niall Ferguson’s The Ascent of Money, but they do not. Until conservatives have skin in the Hollywood game, American culture will continue to be shaped by movies like The Big Short.