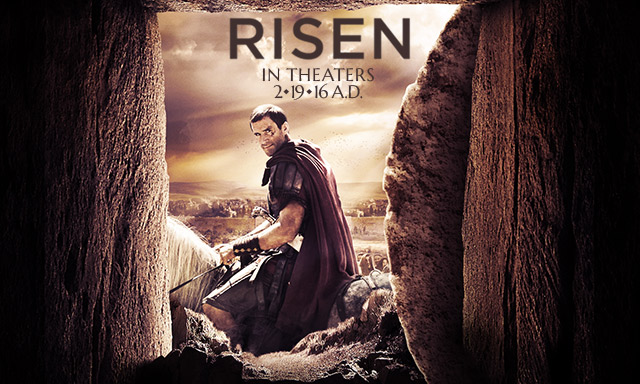 Joseph Fiennes stars in the new film “Risen”, an epic portrayal of the resurrection of Jesus from the perspective of Clavius, a Roman soldier. An all-star lineup of actors star in Risen, including Cliff Curtis ( Life Free or Die Hard) as Jesus, Tom Felton (Draco Malfoy in Harry Potter) Clavius’ aid, and Peter Firth (The Hunt for Red October and Pearl Harbor) as Pontius Pilate.

The film opens with Clavius loyally fighting for the Roman Empire. His reputation as a fiercly devoted soldier catches the eye of Pontius Pilate, who summons Clavius to his personal service. Pilate’s desire is to ensure that “the Nazarene” who’s been creating conflict in the region is crucified, buried and that the “problem” is laid to rest.

When Jesus’ body disappears from the carefully guarded tomb, Pilate commands Clavius to track down the body. So begins the great manhunt! Leaving no stone unturned in the search for Jesus’ body, Clavius orders recent graves to be dug up and arrests anyone caught discussing the risen messiah. In one of the most moving scenes of the movie, Mary Magdalene is brought in for questioning. Clavius demands that she tell him where the messiah is and he’ll free her. She gently replies, “I’m already free!”

The first half of the movie feels like an extravagant pursuit, while the second half develops into a slower, more intimate portrayal of what life between the resurrection and ascension of Christ would have felt like.

Throughout the movie, there were moments of tenderness and humanity from Clavius. He is obviously wrestling through what he actually believed about Jesus, His deity, and how the resurrection would affect his life. When Clavius stumbled upon Jesus in an upper room with the disciples, he left his post as a Roman soldier to follow the disciples and Jesus.  The film does not fully answer the question of what Clavius finally believed about Jesus. In the closing scene, when asked if he believes, Clavius replied, “I believe…. I could never be the same.”

Cliff Curtis, who portrays Jesus, stated in an interview,that growing up Jesus was his superhero, and he was obsessed with the Bible, not with comic books. Curtis said he never thought he would get to play Jesus and that this role felt like a miracle to him. One of the things he did to prepare was take a vow of silence and live alone for a month to mentally and spiritually prepare for this paramount role. The character of Jesus in the film has very little dialog, but the lack of words proves to be powerful.

When asked what attracted Fiennes to the role, he stated that being in a Kevin Reynolds film was an attraction, but his big hope was looking at the narrative through a different angle, through the eyes of a Roman soldier. Fiennes said that the movie was pure cinema, and that he is foremost a lover of stories. The Bible is the most extraordinarily rich sources of narratives, featuring the most beautiful stories ever written or handed down. It’s obvious from Fiennes’ comments that he considered himself privileged to act in this film.

This is definitely not a poorly done, cheesy Christian movie! This film is an incredibly well-done period piece that shows the resurrection of Christ through the eyes of a non-believer. While the Gospel wasn’t clearly presented, and the purpose of Jesus’ death and resurrection wasn’t ever explained to the viewer, it’s clear that while the movie does have spiritual undertones.

The purpose of the film isn’t to “save” people, but to give them a different perspective and to leave the audience wanting to know more about the beloved Jesus in the film.