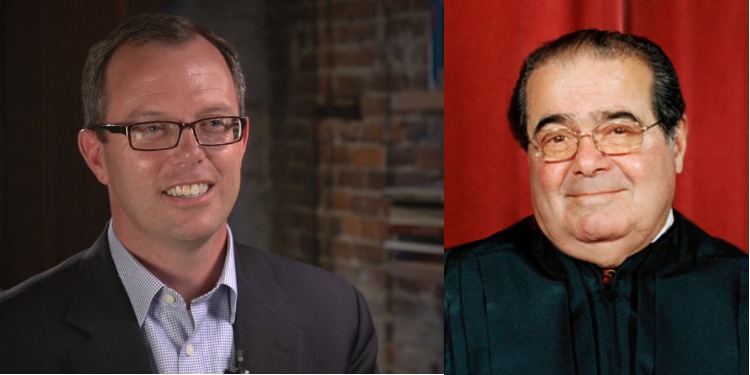 Congratulations Mr. Ring on your new book, Scalia’s Court: A Legacy of Landmark Opinions and Dissents!  Can you give us an overview of your book, and what was your inspiration putting this collection together?

I was one of many conservative lawyers and Supreme Court watchers I knew whom, upon hearing about a new Supreme Court decision, would always ask, “Did Scalia write?” I looked forward to reading his opinions every term, especially in the big cases on the most contentious subjects. While there are a couple of comprehensive biographies of the justice, and many books and law review articles that dissect his record, there were no books that simply allowed Justice Scalia to speak for himself. I wanted the public to read entire Scalia opinions and not be distracted by the filter and biases of the media or liberal law professors or commentators who tend to write about the court.

I hope people take away from the book, first, how principled and consistent Justice Scalia was in applying his judicial philosophy. He sometimes reached conclusions that differed from his personal policy preferences. Most justices on the court today and in recent history have interpreted the Constitution in ways that allowed them to always find their preferred outcome to be the right legal outcome. Justice Scalia subordinated his personal policy positions and put the law first.

Second, I want readers to understand just how unique Justice Scalia was for having a judicial philosophy. Very few justices hold themselves to a standard by which their opinions can be judged by their fidelity to that standard. Justice Scalia was rare in this regard.

Finally, I hope readers appreciate what a gifted writer and communicator he was. His opinions are eminently readable and often funny, two qualities rarely attributed to Supreme Court opinions.

What is Antonin Scalia’s legacy with the courts, and perhaps the conservative movement at large?

Justice Scalia’s opinions demonstrated a reverence for the U.S. Constitution and the system of government created by it. Today, we see some self-proclaimed conservatives pay lip service to important constitutional values such as separation of powers, federalism, and fundamental individual rights, but Scalia did more to preserve those values than any conservative in recent times. For the conservative movement, he was the North Star, the intellectual leader who showed conservatives how to advance the Constitution and do so with brilliance and passion.

Can you define Originalism, and discuss why it’s important?  How does it differ from Judicial Activism?

Originalism is the view that the Constitution should be interpreted to mean what it meant to those who wrote and ratified it. That does not mean the Constitution is stuck in the past; Scalia skillfully applied the protections in the First Amendment to modern innovations, such as the Internet. But he did not think that judges should create new rights that were not included in the Constitution. That regrettable practice is judicial activism.

What were one or two interesting things about Justice Scalia you learned during this process that you didn’t know before?

I always loved Justice Scalia’s fiery dissents. When he was speaking for himself and not for a majority, he was free to really take the bark off his opponents’ arguments. He was biting, cutting, and just plain funny at times. What I learned was that his most memorable opinions were written so that they would be, well, remembered. He knew that dissenting opinions might become majority opinions in the future if the makeup of the court or the culture changed. In order to make sure law students and the public understood the depth of his disagreement and knew that there was a different way to approach an issue, he wrote opinions that demanded attention and would be remembered in the future.

What were one or two cases that Justice Scalia thought were the most important of his career?

I think two of the decisions he was most proud of were Heller and Morrison v. Olson. In his 2008 Heller opinion, Justice Scalia wrote for the majority that the Second Amendment protects an individual’s right to keep and bear arms. This right was not reserved for members of the National Guard or militias; it was a right that belonged to individuals. I think this opinion was especially gratifying for two reasons. First, Justice Scalia was able to stand up for a constitutional freedom that is actually in the text of the Constitution that many so-called liberals were willing to write out of the document. Second, his opinion was an awesome display of his originalist judicial philosophy. He examined the origin and history of the Second Amendment. Notably, even the justices that dissented in the case engaged in Scalia’s originalist analysis. While they reached a different conclusion, they fought on his terms.

Morrison v. Olson was a very different opinion. In 1988, just two years after joining the Court, Scalia wrote his masterful dissent in which he set forth the constitutional and practical problems of the Independent Counsel law. Scalia argued that the law creating a process for appointing independent prosecutors violated the Constitution’s separation of powers. He went further, however, and predicted that the law would have terrible real-world consequences, as well – specifically, runaway, unaccountable prosecutors with huge budgets who would investigate individuals for years and years until they found something. Sure enough, after Republicans saw independent counsel Lawrence Walsh conduct a partisan investigation into Iran-Contra and Democrats experienced independent counsel Ken Starr investigate President Bill Clinton on a broad range of misdeeds, both sides realized that Scalia was right and let the statute expire in 1999.