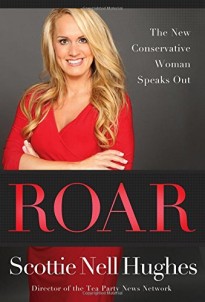 , particularly bears the timely message needed to connect with young, independent women who have been apathetic about politics or uncertain about conservative values and the Republican Party.

“Today’s Republican party, just like an adult daughter, needs to embrace the numerous strengths of the past and be able and willing to identify and update those characteristics that are time sensitive while never compromising the overall foundation and framework of the party,” writes Scottie.

“Not since the suffragette movement has the issue of women in politics been center stage,” Scottie observes, noting the contrived “war on women” talking points and anticipation of their renewal at Hillary Clinton’s potential 2016 presidential bid.

Scottie demonstrates how to meet the mainstream where it’s at, upholding conviction without making a girl feel judged. “We start with stories,” she explains. “Women are great storytellers.” Everyone especially appreciates a good behind-the-scenes story because it reminds us that we can succeed as well, and Scottie shares her experiences from dating in college to debating Piers Morgan to visiting troops in Iraq.

Readers will learn some personal background about the author (hint: it’s no wonder that Scottie is such a good interviewer – her mother was an expert interrogator!), and in baring her own roots she finds ours.

Women want security and a sense of community, and they want to feel worthy. Progressives (whom my mother says should actually be called “Regressives”) take advantage of this desire by perverting it into an entitlement mentality.

The Progressive methodology as Scottie has deduced it is this: “Take something that works, demonize it, throw money at its competition, lie that the competition is better, then destroy the original working thing so that there’s no choice but to use the inferior product. Sounds a lot like what’s been happening in the health industry with Obamacare, doesn’t it?”

In the same way, liberals have demonized the true nature of womanhood and the family and lured voters into preferring Nanny state substitutes.

Scottie asserts that conservative women have the self-respect and realistic outlook to understand that women are not inferior when they assume roles different from men. Rebuking the statist belief in feminist victimhood, she writes, “I refuse to accept such an insulting point of view that tells me I am inferior to men since they are dominating me both in the workplace and home.” Disabusing men only fuels statism.

Remember that Alexis de Tocqueville (1805-1859) determined through eye witness study that the “chief cause” of the United States’ success was in the “superiority of their women” – and that was before they voted or held office! American strength begins in American homes.

Roar features a particularly meaningful chapter on the folly of women in military combat, and serves to remind the reader that respecting the inherent differences between men and women is a matter of science and common sense, not oppressing or degrading women. Besides, “we have more than enough of a battle to fight here at home,” writes Scottie.

“If we are willing to risk shaking up a peaceful environment over subjects like clothes, relationships, and faith, then we should not be afraid to speak our mind regarding what we believe politically,” writes Scottie.

How do we go about this? Scottie says Fox News’ The Five offers some inspiration: “unlike other shows that do it by snarling and growling, they repeatedly inflict their wounds wrapped either in Greg Gutfeld’s well-crafted monologues or with smiles as sweet as molasses. Even their banter with the token Liberal Bob Beckel or Juan Williams is clothed in love as you can tell the other political hosts genuinely care for their Liberal friend on the panel.”

This is important for principled American youth living in a sea of statist-influenced peers.

Like Scottie says, “while Conservative principles never change, every day is a new opportunity to frame the way we talk about our beliefs.”

Written by Amanda Read, from Turning Point USA.  Amanda Read is a writer, historian, and filmmaker based in Alabama who investigates the roots of contemporary culture and politics.