Popular Economics: What the Rolling Stones, Downtown Abbey, and LeBron James Can Teach You About Economics 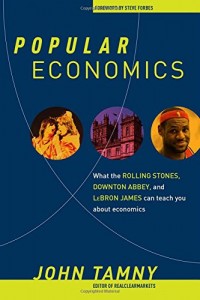 In Popular Economics, RealClearMarkets editor John Tamny tells readers that the complexity of markets purported by politicians and some economists is misleading. The powers-that-be are able to maintain the status quo by convincing the consumer to leave economic decision making in their hands, while their overcomplicated, bureaucratic solutions show their poor comprehension of economic principles . “In truth, nothing is less complicated than the subject of economics, and therefore nothing is easier than economic growth,” argues Tamny.

Throughout the book, Tamny uses tangible, pop culture examples of economics in action. For instance, England losing capital from the Rolling Stones by running them out of the country with absurdly high tax rates, and Detroit’s economy being ruined by bailouts while Las Vegas’s economy thrives because it  bulldozes what fails to work. Today’s Americans have been so desensitized to government overreach that we can underestimate the role government intervention plays in failure. Tamny makes the connection unmistakably clear. “The market sees to it that poorly run businesses are starved of capital so that they cannot waste any more of it,” writes Tamny. “Government, by contrast, devotes more human and financial resources to what isn’t working,” and “government can only give what is first taken away.”

Tamny considers the Fair Tax to be the most reasonable alternative to our current tax code, because it would be “a tax on consumption rather than income,” putting the taxpayer in control of government revenue. He observes our current tax code to be a tool of social engineering, and our federal regulatory system to be plagued with conceit that assumes bureaucrats know better than the talented people creating the wealth. Tamny brings vast subjects like outsourcing and trade down to an individual scale, revealing that the choice to give some tasks to others is about tradeoffs that free us to focus on what we do best. “Free trade is about our right to exchange with anyone without answering to politicians,” writes Tamny.

Readers might be skeptical of the Tamny’s claims that energy independence for technology-leading countries like the U.S. and Israel is not a wise goal from a comparative advantage standpoint. “A politically driven national quest for the false god of ‘energy independence’ would be the equivalent of LeBron James’s splitting his time between basketball and football – unnecessary and counterproductive,” writes Tamny. “Oil companies, moreover, are sitting ducks for the depredations of tax-happy politicians, further diminishing their appeal as investments…The United States should treat oil as what it is – a commodity that will reach us in abundance no matter where it is drilled.”

Fiction and sports provide examples and metaphorical illustrations in Popular Economics. Tamny uses the plot of Downton Abbey to portray the folly of the estate tax, and has the reader envision how impracticable a yard in football would be if its value fluctuated like our U.S. currency does without being defined by the gold standard. Popular Economics offers historical overview relevant to the economic principles discussed, including entrepreneurial adventures behind ESPN, Netflix, and the Dallas Cowboys. In his survey of presidential administrations’ economic policies Tamny pulls no punches and doesn’t hesitate to point out instances where Bill Clinton did something right and George Bush did something wrong. “Inflation is a decline in the value of the dollar – nothing more and nothing less,” explains Tamny. “Presidents always get the dollar they desire.” Tamny finds the 2008 economic crisis to ultimately be rooted in the weakness of the U.S. dollar, which prompted people worldwide to invest in housing, “the classic inflation hedge,” and that this was aggravated by government subsidies. Rather than let the self-healing processes of capitalism initiate, the federal government intervened.

Tamny’s book is one you want on the shelf whenever you need a solid but fresh, pithy, and culturally relevant reference on basic economics. The overall message of Popular Economics is that economics itself is easy. It is only when government intervenes  that economics become difficult.