A Time for Action: Empowering the Faithful to Reclaim America 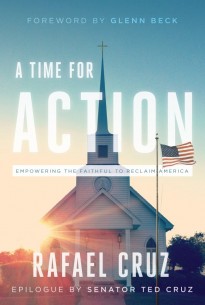 During a presidential election year saturated in salvationist rhetoric, readers may see the title A Time for Action: Empowering the Faithful to Reclaim America and think they already know everything that can be said on the subject.

They will readily recognize the facts and arguments in chapters like “Does Communism Work?”, “Six Dangers If America Doesn’t Change Course,” and “Rescuing America From An Age Of Lawlessness.” But there is so much more in learning from the real-life experiences of an elder who has lived these lessons himself. That’s what Rafael Cruz offers in A Time for Action. He makes it immediately clear who his intended audience is: American Christians.

“All my life, I had lived according to my own rules,” Cruz says in the first chapter. “But I still didn’t feel free.” As a teen, Cruz nearly became a casualty of the Cuban Revolution while aiding Fidel Castro’s 26th of July Movement in revolting against the tyrannical regime of Fulgencio Batista.

Cruz’s story of imprisonment in Cuba and subsequent freedom in the United States is intense (it involves torture and interrogation), but that transformation pales in comparison to Cruz’s story of imprisonment by sin and subsequent freedom in Christ. His native Cuba perverted victory over tyranny when, in Orwellian fashion, it usurped one form of totalitarianism with another as Castro implemented communism. Cruz meanwhile thrived in his newfound liberty in America, only to lose its value in the personal bondage of sin and unbelief. At the same time, America was beginning to trade its Christian foundations for secular postmodernism.

Media portrayals of Rafael Cruz as a shallow zealot overlook his background as a scientist. He studied chemical engineering and mathematics at the University of Texas – the university that paved the way for his student visa from the U.S. embassy in Havana (a lawyer friend helped him get an exit permit to complete his escape from Cuba). “Religion is a product of ignorance,” Cruz thought, despite coming from a Catholic household. He sought reason and evidence to be convinced of God’s existence and Jesus Christ’s messianic identity. But Cruz’s conscience was also tugging at him.

“The guilt of abandoning my wife and four-year-old son two thousand miles away weighed on me as if I were swimming in the ocean with a cinder block around my neck,” writes Cruz regarding when he left his wife and child in Calgary for work in Houston. “The weight finally brought me to my knees. Literally.”

Yet his skepticism held out in a conversation with a pastor for several hours, until the pastor finally blew him away with a simple answer: “To tell you the truth, I don’t know about that man up in the mountains of Tibet who has never heard about Jesus. But you have heard about Jesus; what is your excuse?”

Cruz was convinced. “As I concluded my prayer, I felt as if somebody snipped the cord that had enslaved me to that massive weight,” writes Cruz. “I was free. Finally, totally free!”

The healing conversion is not fancifully effortless for an individual, nor is it for a country. Cruz’s message is not to be taken lightly. He lost a daughter’s life to the cycle of broken marriage, a business to misreading the economy, and his Cuban homeland to a deceitful revolutionary.

Cruz wants to see Americans spared of such tragedies, and presents Jethro’s advice to Moses (Exodus 18) and the First Great Awakening as inspirations for restoring our society from the inside out. “Secular historians who minimize the First Great Awakening’s influence on the American Revolution and our founding fathers commit a disservice to every American,” Cruz asserts, and he includes appendices of primary sources in his book, featuring Reverend Jonas Clark’s sermon preached before the Battle of Lexington.

“We need to stop simply playing church inside the four walls and take the church out to the marketplace,” writes Cruz, who advocates encouraging pastors to speak freely on the issues of our day and perhaps even run for political office themselves. Cruz’s book is about the process of repentance from apathy, declaring “the whole counsel of God” (Acts 20:27), getting involved locally, and holding leaders of all authority levels accountable at the ballot box.