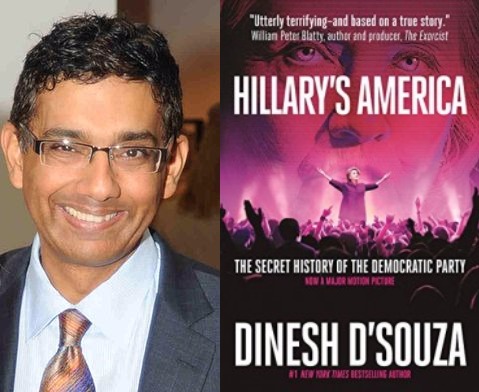 Dinesh D’Souza’s newest film, Hillary’s America, is based off his new book of the same title — and begins where his last film 2016: Obama’s America left off. D’Souza briefly recaps the predictions he made in 2016, highlights what he believes has come true, and sets the stage for his latest political documentary, exploring the background and history of the Democratic Party.

In 2014, D’Souza was indicted on charges of making illegal political contributions to a campaign. He pleaded guilty and was sentenced to spend 8 months in a halfway house. During his time in the halfway house, he interacted with members of society that aren’t like him, and encountered the gang mentality in America.

“For years, I’ve had an idealized picture of America. What’s dawning on me now is that I’ve been too focused on America as it ought to be. There’s another America – the America of the street, with its own code. Gangs. Street gangs, political gangs, they own you. That’s why I left India.”

D’Souza muses that he believes that the Democratic Party is patterned after gangs, and that their goal is the same, to hoodwink the people and steal everything from them.

“What if the goal of the Democratic Party is to steal the most valuable thing the world has ever produced? What if their plan is to steal America?”

Throughout the duration of the documentary, D’Souza explores what the Democratic Party really is, and dives into their history.

“The Democrats are the party of economic equality, social justice and racial equality, but is it true?”

D’Souza begins by examining Andrew Jackson, the so-called “champion of the common man.” However, Jackson was an avid racist, a slave owner, and an advocate for stealing Native American land and selling it for almost nothing to white settlers. Jackson was also one of the fathers and establishers of the Democratic Party. According to D’Souza, Jackson’s popularity was “that of a gang leader who distributes his spoils in exchange for loyalty on the part of those who benefit from his crimes.”

As the history lesson through the Democratic Party continues, slavery is the next topic of investigation. The Democrats created as many ways as they could to justify slavery. Senator John C. Calhoun declared that slavery wasn’t just beneficial for the masters, but that it was also good for the slaves. In contrast, the Republican Party was born with the single purpose of stopping slavery. The Republicans in Congress, none of which owned slaves, understood that slavery robbed a person of their life, and fought in favor of ending it.

D’Souza asserted that, “the Civil War is better understood as the anti-slavery Republican party and the pro-slavery Democratic Party.” The Democratic Party fought against the 13th and 15th amendments, which permanently outlawed slavery and gave blacks the right to vote.

Margaret Sanger, the founder of Planned Parenthood, a role model for Hillary Clinton, and an advocate for eugenics. Planned Parenthood specifically targets minority groups today, building their clinics in the middle of inner cities. In New York City, more black babies are aborted than born alive, which goes to show that African-Americans and other minority groups are the target of eugenics, contrary to the rhetoric coming from the Democratic Party.

D’Souza finally gets around to discussing Hillary Clinton towards the end of the film, calling Bill and Hillary “depraved crooks”, highlighting their corruption.  Hillary’s ties to Saul Alinsky, well-known for his book Rules for Radicals, is discussed and D’Souza talks about the fact that Hillary wrote her senior thesis on him. Another part of the Clinton’s corruption, the Clinton Foundation, is highlighted for padding the pockets of the Clintons instead of helping the Haitians during their crisis in 2010.

“Hillary Democrats take everything from everyone. Democrats are the party of exploitation, subjection, and theft. They blame the South, the Republicans and even America for the horrible things they have done. They are the ones that are to blame.”

D’Souza ends the film by powerfully stating that, “They can’t take American without our consent. Go out and vote.”

Overall, my opinion was mixed. While I appreciate D’Souza’s political documentaries, “Hillary’s America” felt a bit rough around the edges with some pretty bad acting. I was expecting D’Souza to make predictions of what another Clinton presidency would look like, but the main push of the film is a history lesson of the Democratic Party.

I would recommend this film, as it does a good job examining the history of the Democratic Party, which I think is an incredibly important lesson for voters in this election!