Could Japan Have Invaded In WWII? (Author Interview: Bill Yenne) 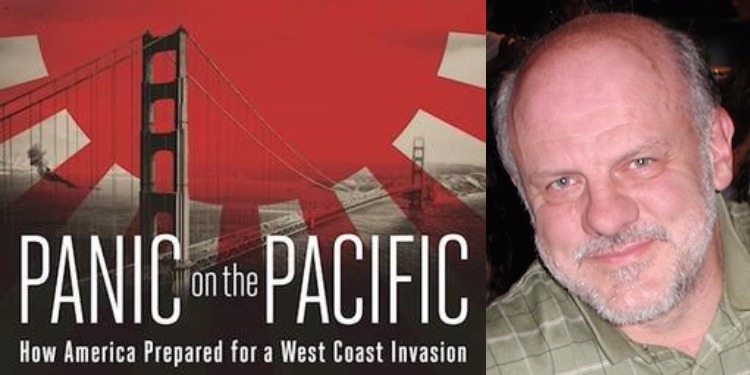 Congratulations Bill Yenne on your new book Panic on the Pacific: How America Prepared for a West Coast Invasion! Give us an overview of your book:

The book takes the reader back to the Pacific Coast of the early 1940s, a vibrant land with a unique identity. It was surprisingly isolated— by more than a thousand sparsely populated miles of mountains, deserts, and plains— from the distinctly separate reality of the United States east of the Mississippi.

On December 7, 1941, Washington, Oregon, and California felt the vulnerability of their isolation. It had been said that the Pacific Coast could never be attacked by a foreign power. It had also been considered absurd that Hawaii could be attacked from the air. Now people were looking out to a western horizon no longer defended by the US Fleet. Concern turned to worry. When visibly nervous leaders began to insist that Japanese airplanes were already over the West Coast, worry turned to fear. When Japanese submarines began attacking coastal shipping with impunity, fear turned to panic – panic on the Pacific.

Tell us why you wrote it:

In the course of writing more than two dozen books about World War II, I had often run across accounts of the British fear of a German invasion in 1940. Living on the West Coast, and often driving the coastal highways of Washington, Oregon, and California, I have turned eyes to the horizon and wondered, “what if it had happened here?”

In the course of writing this book, one of the stark contrasts that emerged was in a comparing the leadership styles in 1940 Britain and the 1941-1942 Pacific Coast. In Britain, a resolute Winston Churchill rallied his people to prepare heroically to meet the challenge. Meanwhile, the man charged with the defense of the entire Pacific Coast, General John DeWitt of the Western Defense Command, reacted with a jittery apprehension that inspired not confidence, but the fear that morphed into panic.

What is something interesting that the public may not have known about the Pacific theater in WWII?

Unlike other theaters where the final scene was one of triumph, the Pacific Coast Theater teetered on the precipice of disaster because of poor leadership, and faded into obscurity only because the enemy chose not to attack. As commander of this theater, General John DeWitt was a man deeply in over his head. He had little leadership experience with combat units, and his insular career had taught him nothing about crisis management, or dealing with the civilian institutions who now looked to him for leadership.

Can you discuss the Japanese internment policy of FDR, and how history should judge it?

In the wake of Pearl Harbor, a dark curtain of fear descended upon the Pacific Coast. Hardly a day went by that the phrase “fifth column” was not mentioned in West Coast newspapers. By this, it was meant the feared cabal of Japanese sleeper cells that were loyal to Imperial Japan. Uncertainties about Japanese neighbors, combined with General John DeWitt’s paranoid rants, created a climate of distrust.

Among these political leaders, there was perhaps no one more outspoken than California Attorney General Earl Warren. Indeed, he won the governorship in 1942 on a platform of toughness with the Japanese-Americans. Of course, there is a great deal of irony in his having reinvented himself a generation later as a paragon of Civil Rights!

By February 1942, there was a political unanimity on this issue on this issue across the Pacific Coast. An astute politician, FDR sensed this and signed infamous Executive Order 9066, which did not mandate internment, but allowed “the Secretary of War and the said Military Commanders to take such other steps as he or the appropriate Military Commander may deem advisable to enforce compliance with the restrictions applicable to each Military area.”

With Pearl Harbor a big part of your book, do you feel that America is ready for an attack on the homeland if one were to happen?

Pearl Harbor shocked the nation like nothing else in the twentieth century, and it became the catalyst for the events which unfold in the pages of this book. Today, as on December 6, 1941, the Pacific Coast rests under the assumption that there can be no attack from foreign conventional armies or navies. However, internet-facilitated terrorism lurks, and it cost more lives in San Bernardino in December 2015 than were lost to enemy action on the entire Pacific Coast through all of WWII.

Meanwhile, across the globe in North Korea, work is progressing earnestly toward the goal of an ICBM that can carry a nuclear warhead to those same three Pacific Coast states that are discussed in this book. As unpreparedness defined the defenders of the Pacific Coast, the missile defense shield project that could protect the Pacific Coast from ICBM attack has progressed at a snail’s pace, having been underfunded and even vilified by political leaders for more than a generation.

I hope that readers will find the stories, many of which are generally unknown, both enjoyable and entertaining. On the lighter side are the inept marksmen manning the deck guns of Japanese submarines, who could have done so much more damage to both American shipping and targets ashore, had they learned to shoot. There is the little known story of the Coast Guard in southern California having to borrow Tommy Guns from the prop room on the Paramount Studios back lot.

Then, of course, there is the infamous Battle of Los Angeles in February 1942. Thousands of people saw hundreds of enemy planes overhead, and thousands of rounds of antiaircraft ammunition were fired as searchlights stabbed the night sky. There were even sightings of a huge spherical object that still excite UFO buffs.

In the morning, no Japanese planes were found to have been shot down. From Washington, the Navy Department called it a false alarm. The War Department insisted that the Japanese had been overhead. This discrepancy was never reconciled. To this day, because of this, and because of other various mysteries associated with that strange night, the Battle of Los Angeles “cover-up” still rates its own small cadre of true believers whenever conspiracy theorists congregate.