How Would Mt. Rushmore’s Presidents Fare Against Liberal Media? 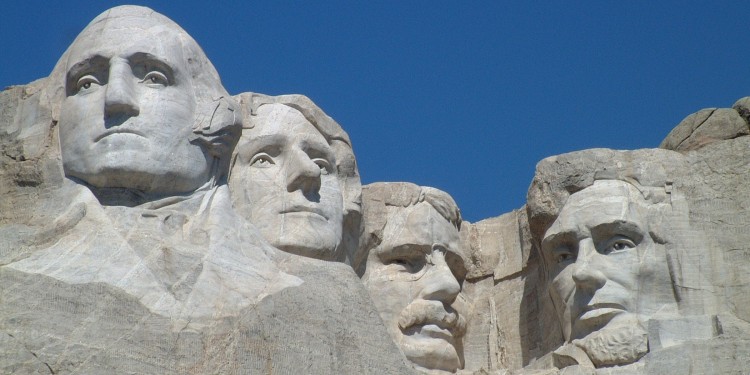 21st century America isn’t particularly puritan, but the sensationalized sins of a presidential candidate are enough to make some voters pine for arbiters of morality and tone of bygone days. They seem to presume that a vote for a candidate that has not upheld all of your principles in their personal life is to sell your soul in an act of Machiavellian hypocrisy. But chances are that the modern voter’s conscience would bristle just as much if past candidates swapped faded daguerrotype with high definition levels of scrutiny.

Would a candidate stand any chance in the polls today after saying, “criminals should be sterilized and feeble-minded persons forbidden to leave offspring behind them,” and saying that 9 out of 10 Native Americans are better off dead? That’s Theodore Roosevelt, the Rough Rider conservationist who successfully stewarded the U.S. into the complex 20th century.

How about someone who, in the words of observant journalists and experts, is a “buffoon” with an “inborn weakness” for and “no ability to discriminate” in telling dirty jokes even in public, sometimes when standing in the courtroom? That’s Abraham Lincoln, who pioneered the Republican Party into near instantaneous presidential success by supplanting one of the two major parties of the day (the Whig Party), and who eventually kept the States united with a groundwork for civil rights.

Would it be arguably unconscionable to vote for someone who (by modern software standards) partly plagiarized John Locke, edited his own version of the Holy Bible, fathered perhaps six children out of wedlock with a slave concubine, and called for Virginia bankers to be executed if they enforced a federal law he hated? That’s Thomas Jefferson, the libertarian godfather who was such a limited government purist that he thought even Washington’s administration was borderline monarchical.

Perhaps nowadays voters would cringe and fear the temperament of a candidate who tormented subordinates, flogging them and knocking their heads together, and who on his own initiative had a couple of them hanged in front of the others to instill fearful discipline and, possibly, violated international protocol in a moment of rashness that got a French ambassador killed…and who, along with Jefferson, was a slaveholder. That’s George Washington, our incomparable first president.

These aren’t mere former presidents. These are our towering model statesmen on Mt. Rushmore. That doesn’t make their flaws any more palatable or excusable, but it does illustrate how an outward purity test in the era of TMZ and 24/7 media coverage could have exploited their controversial personalities and overlooked their presidential value.

Presidential candidates are subject to the universal consequences of sin as any other human beings. But there are simply are no current laws against those things unrelated to executive power which can bar someone from the presidency. It is thus fallacious to invoke Machiavellianism when talking about the personal sins of U.S. presidential candidates. Citizens will certainly object to subsidizing those sins in a civil office, especially if the behavior appears to be affecting policy (as in the case with Governor Bentley’s adultery scandal in Alabama). But a history of personal immoral behavior does not tip the scales when contrasted with the quality of current and future governing principles that affect the people. Sins against the country are of greater character concern in civil office than are sins against select individuals.

It’s difficult to find both political capability and impeccable character in the same individual. Perhaps Benjamin Franklin wouldn’t be taken seriously on this subject today because of his own sullied lifestyle. But when Franklin addressed the Constitutional Convention about character, he specified “the character which the Scripture requires in Rulers, that they should be men hating covetousness,” officials who would not defraud the public and put their desires above the people – a more relevant and attainable ideal for the Rushmore crowd and politicians today than having exemplary personal lives paired with no governing or electoral competence.