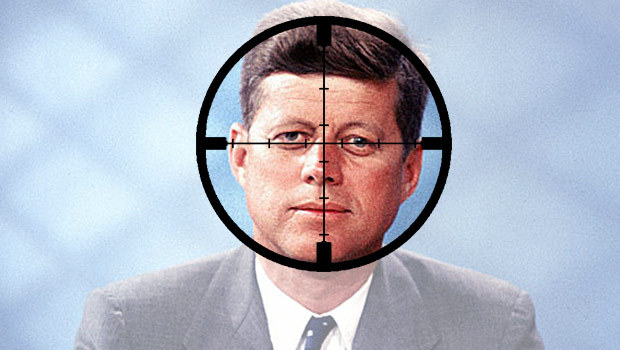 Congratulations Robert Wilcox on your new book Target JFK: The Spy Who Killed Kennedy!  First, what new information do you have that the American public already doesn’t know?

The book is based on never-before-revealed secret diaries of a Cold War assassin, Douglas Bazata, who was at the heart of the clandestine world at the time JFK was murdered. The diaries and other information I’ve gathered tell the story of a good friend of Bazata’s, Rene A. Dussaq, whom Bazata says conceived the plan to kill JFK and led it at Dallas. No one has ever gathered this evidence before, but Bazata’s key position in the clandestine world at the time of the assassination means it must be taken seriously.

Dussaq himself is almost unknown to the American public – which, of course, is how a successful spy works. His life is amazing. Born in Argentina, he was the son of a Cuban diplomat and Sufi mystic who taught him to be a “lion” in his approach to life. He did just that, intellectually and physically. He was successively an Olympic athlete, Cuban revolutionary, Hollywood stuntman, world adventurer and lecturer, World War II legend in France, FBI counterspy, and, per the diaries, a spy for Castro’s Cuba. He even flew through an atomic bomb test. He did most of this secretly and, following the war, kept most of it secret while seeming to be only a successful and respectable Los Angeles insurance agent.

In sum, his life was bigger than you see in the movies – certainly in the mysterious context of being involved in the JFK assassination. And because the story has never before been told, it’s only in Target: JFK.

Why has this information been hidden all this time?  Who’s covering this up?

As readers will find, it wasn’t supposed to be hidden. Dussaq wanted Bazata, before the assassination, to tell American authorities that if the U.S. didn’t stop trying to assassinate Castro, there would be retribution. Kennedy would be killed. Dussaq hoped the warning would put a stop to the attempts. But when Bazata informed his CIA contacts about the plot, they stonewalled him. They did nothing. This scared Bazata because now they knew that he knew about the planned assassination before it happened. Much later, Bazata again tried to tell his story, but the Mafia, who play a mysterious part in the diaries, warned him that would not be wise. He retreated again.

I think the story would have remained buried had I not come to Bazata when I did. This was while I was working on another book. Bazata had recently suffered a stroke. He was no longer the tight-lipped spy  he’d always been. I found the diaries in his basement. When I asked him about them he said take what you want. I did. It was only later, after gleaning from them what I wanted for the other book that I realized, buried in his personally coded entries, there was another mystery – the JFK assassination.

As far as a cover-up, the CIA, I believe, has documents on Dussaq. I know it has them on Bazata. Who knows how much of the story it has locked away? But we are soon to get another dump of heavily guarded CIA material from the National Archives and perhaps that will begin to tell the story of Dussaq. Maybe it won’t. The diaries implicate members of the CIA as some of the shooters in Dallas. So how much does it want to reveal? How much does it really know about its own rogues? I’m as interested as anyone to know.

Give us more background on Rene Dussaq.  Where did he come from and why would he want to assassinate JFK?

Dussaq was born in Argentina. His father was a Cuban diplomat stationed there. He’d worked on the post-World War I League of Nations. He was also a Sufi mystic who believed in strong mind and body. He taught this to Rene who used it to erase fear and seek challenges. By the time he was three Rene could walk on his hands as well as he could on his feet. He joined the circus as a young man and once walked on his hands atop the windswept Empire State building.

When his father was posted to Switzerland, Dussaq went to Swiss schools, learned many languages, and became a teenage Olympic rower. But Cuba was his love. He spent summers there, was a Cuban tennis champion, got involved with the Cuban revolution, and had to flee. That brought him to Hollywood where he became a stuntman, and, with his fearlessness, caught the eye of the Jacques Cousteau of the 1930s, John Craig. He joined Craig as a deep-sea diver and treasure hunter around the world – perfect for a spy on the eve of WWII. When the war started, he was recruited into the OSS as a Jedburgh, a member of our first large-scale special forces. He jumped into occupied France and became the legendary “Capt. Bazooka,” still talked about there. He single-handedly bluffed hundreds of Germans into surrender.

After the war, he became an FBI counterspy infiltrating Hollywood communist cells and, following participation in the Bikini Atoll atomic tests, went to Germany as an intelligence agent on the border of the Iron Curtain.

I’ll leave the thumbnail description at that. Because, per the diaries, behind all that, he was a Cuban spy. He loved Cuba. That is where his allegiance was. After the war, he told Bazata, who wanted him to join a group of freelance spies and saboteurs in Europe, that he was going to devote his life to freeing Cuba of all outside interference and dominance. At his essence, Dussaq was a believer in the freedom of people and countries to determine their own destiny. He felt Cuba was being exploited by the U.S. Since the Spanish-American War, America had used the Platt Amendment in Cuban affairs.

This led to exploitation, so vividly depicted in The Godfather with U.S. gangsters cutting a cake shaped like Cuba. This was his motivation: free Cuba. The diaries say he subsequently picked Fidel Castro to be the liberator. They describe a murky relationship between the two.

How would you respond to someone who said this is just another crazy conspiracy theory about the JFK assassination?  What is your evidence based on?

Conspiracies do exist. The House Committee on Assassinations said JFK’s murder was the result of a conspiracy. Further, I’d have to say, do you know who Douglas Bazata is? He was an assassin for the OSS, and after WWII, other governments as well. Have you read his diaries? He was at the heart of clandestine activity when the JFK assassination occurred. One of his best friends was William Colby, who headed the CIA, also a “Jed.” I think what he has written secretly has to be taken seriously.

A good friend of Bazata’s was Lou Conein, the infamous CIA agent who ran the assassination of Diem in Vietnam a month before JFK was assassinated. Conein, as close to James Bond as an American spy gets, provides part of the evidence that Bazata’s diaries are true. More evidence is provided by Ralph de Toledano, a founder along with Bill Buckley of National Review. Toledano didn’t think this was just another crazy conspiracy theory. He believed it and almost brought it to the American public – until the Mafia told Bazata to retreat.

One of the things that is not well known, if at all, is the fact that Castro and his agents were the first suspects in the assassination. Just days after the assassination, an eyes-only report circulated in the White House. It provided evidence that Castro, who had said he would retaliate if JFK didn’t stop trying to kill him, was behind the hit. The administration did not stop their attempts. The report was so explosive that new President Lyndon Johnson ordered it buried. If the American public learned what was in it, he said, the U.S. would have to invade Cuba and thus start World War III. Cuba was allied with Soviet Russia. This is all in the book. There are good reasons to think this is not just another crazy conspiracy theory.

From this incident, what can we learn and take away to help us better understand our government and threats to it in the future?

That’s a tough one. In the case of Dussaq, I’m not sure we can. He was so skilled and so secret, he was able, if the diaries are accurate, to deceive and manipulate American intelligence, at least those who should have detected his plot. How do you defend against that? Of course, given the probability that rogue agents were involved, some U.S. intelligence might have known what he was doing and approved, or, like Bazata, aided. I think the most probable lesson is to keep one’s eyes open. Things sometimes are not what they seem. Vigilance is always a smart policy. The larger the government, the more vigilance is needed. Target: JFK shows how such a conspiracy is conceived, grows, and is finally enacted.