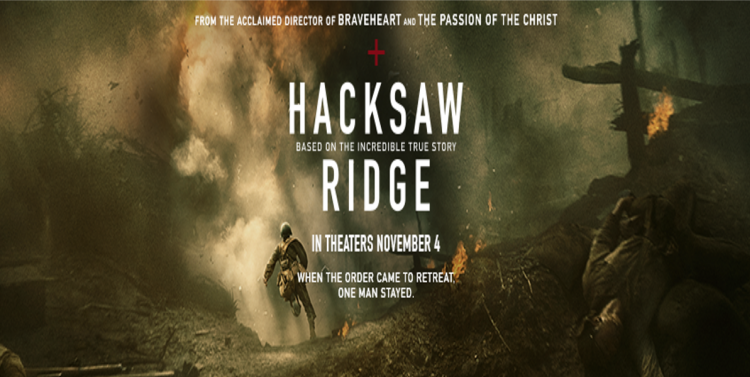 Mel Gibson is somewhat like the Dos Equis “Most Interesting Man in the World,” in that he doesn’t always direct movies, but when he does they tend to be amazing. His latest installment, Hacksaw Ridge, adds to his impressive stable of films — Braveheart (1995), The Passion of the Christ (2004), Apocalypto (2006) — and should be considered for an Academy Award for Best Picture.

Movie critics have regularly likened Hacksaw Ridge to Steven Spielberg’s Saving Private Ryan (1998), primarily due to its gruesome battlefield bloodletting, but a more apt comparison overall requires revisiting Howard Hawks’s 1941 classic Sergeant York. Alvin York was a devoutly religious man from rural America who received the Medal of Honor for single-handedly saving scores of troops during World War I, while Army Medic Desmond T. Doss was similarly recognized for his actions during World War II. The glaring difference between the two men is that Doss refused to pick up a rifle.

Hacksaw Ridge begins in the early 1920s, where a young Doss almost kills his brother by mimicking the violence of his WWI-scarred father Tom (Hugo Weaving). That event, coupled with Tom’s alcohol-fueled rages, solidify the Seventh-Day Adventist’s belief that any killing defies God’s will. Gibson then fast-forwards to the courtship of Doss’ future wife (Teresa Palmer) in Lynchburg, Virginia, and his decision to enlist in 1942. Andrew Garfield does an admirable job playing the “conscientious collaborator,” whose Basic Training hazing is encouraged by superiors Sergeant Howell (Vince Vaughn) and Captain Glover (Sam Worthington).

Much of Hacksaw’s runtime (2 hours, 11 minutes) is prudently dedicated to Doss’ time in Basic Training and the legal battle over his Conscientious Objector status. The director’s project aims to be an anti-war film, but it deftly packs the bulk of that messaging into scenes far removed from the battlefield. Doss’ father is a shadow of his former self, feckless politicians squander the collective sacrifice of the nation’s veterans, and the preparation for a new battle perpetuates the cycle a violence. All of this takes place prior to the medic’s deployment to Okinawa because it is there that Hacksaw shifts its focus to the power of faith.

“I realize that tomorrow is your Sabbath,” Captain Glover says to Doss late in the film after the so-called “coward” saves 75 infantrymen. “Most of these men don’t believe the same way you do. But they believe so much in how much you believe. And what you did on that ridge is nothing short of a miracle — and they want a piece of it. And they’re not going to go up there without you.”

Where does a vegetarian man who looks like a beanstalk find the strength to carry dozens of men to safety while dodging bullets, bombs, and bayonet charges? How does he defy dehydration to safely lower those same men down a steep cliff with just his bare hands and some rope? Mr. Doss credited a higher power, and by the time all was said and done even his skeptical comrades wanted “a piece of it.” Gibson, unlike director Angelina Jolie with Louis Zamperini in Unbroken, does not shy away from the man’s verifiable Christian faith — he embraces it — and the movie benefits.

The 89th Academy Awards ceremony will be held February 26, 2017, at the Dolby Theatre in Hollywood. If Mr. Gibson’s film is not considered for Oscar, then moviegoers will know that the snub has much more to do with Hollywood grudges than a deficiency in his filmmaking skills. The man who directed The Passion of the Christ certainly has been hounded by demons (aren’t we all?), but he also has a God-given gift for making good cinema. See Hacksaw Ridge before it leaves theaters because movies that rival Sergeant York and Saving Private Ryan are few and far between. This one is worth your time.