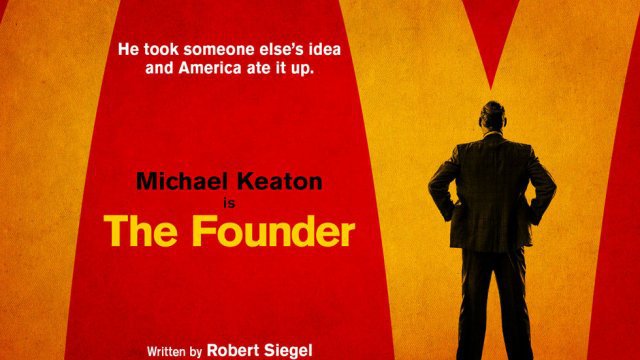 The last high-profile film to put a spotlight on McDonald’s was Morgan Spurlock’s Super Size Me in 2004. The fast food giant was not thrilled with the documentary then, and its executives probably feel the same way about director John Lee Hancock’s The Founder. Regardless, it’s probably the most nuanced Hollywood tale the company will ever get — and at the end of the day it’s a fascinating movie.

The late economist Milton Friedman said in Free to Choose: A Personal Statement: “Our decisions about how to use resources, whether to work hard or take it easy, to enter one occupation or another, to engage in one venture or another, to save or spend — these may determine whether we dissipate our resources or improve and add to them.”

In many ways, that is what The Founder is all about. The other half of the equation, however, covers the trail of personal destruction men often leave in their path when ambition becomes unmoored from virtues like honesty, integrity, loyalty, duty, and respect.

As with any tale revolving around a successful American entrepreneur, the question of scope comes into play. Where does one place creative focus with McDonald’s chain founder Ray Kroc (Michael Keaton), particularly since Richard and Maurice McDonald (Nick Offerman and John Carroll Lynch) have equally compelling stories? Writer Robert Siegel wisely chose not to get too mired in the tumultuous relationship between the three men. Instead, he concentrates on the drive that took Kroc from a self-help listening milkshake maker salesman to a business mogul responsible for feeding 1 percent of the world’s population each day.

The premise of The Founder is rather simple: Ray Kroc meets the McDonald brothers in California in the 1950s and immediately recognizes their fast-food delivery system is something Henry Ford would have created if he loved hamburgers more than automobiles. The brothers put their franchise hopes into the hands of a man who envisions McDonald’s as “The new American church,” even though a part of them suspects they may have made a deal with a devil. Kroc realizes his dreams for taking McDonald’s national, but at a steep price to those in his inner circle.

“A lot of people are afraid of taking a chance to, you know, reach for greatness,” Kroc says to a woman named Joan (Linda Cardellini), who gave him the idea for using powdered milkshakes to cut down on refrigeration costs.

“Greed. Ambition. That’s the stuff of life,” says the businessman, who shortly afterward tells his wife Ethel (Laura Dern) that he wants a divorce.

What is perhaps most interesting about The Founder is that while many critics are quick to cast Kroc as the “bad guy” (it’s easy, given that he says he would put a hose in a drowning competitor’s mouth), the screenplay gives no one a free pass.

Consider the following: The McDonald brothers were perfectly happy to give Ray Kroc a lopsided deal — flanked by their own lawyers — when he wasn’t in a position of power; Ethel wanted to enjoy the trappings of her husband’s success at country clubs without ever showing real interest in his endeavors; and Joan’s husband seemingly let greed get the better of him by searching out Kroc when he was already a wildly successful restauranteur in Minnesota.

At one point in the film Kroc says that it’s a “dog eat dog, rat eat rat” world, and viewers get the feeling that he is largely correct. That begs the question: Why?

The Founder may not have garnered Michael Keaton an award for Best Actor, but it is certainly a film that deserves to be recognized. The screenplay is deceptively thought-provoking, in that it will leave moviegoers mulling over the free market for days after having left the theater. If that prompts Americans to pick up a book by Milton Friedman or Thomas Sowell, then the world will be better off for it.