How Can America Emerge From “Out of the Ashes”? (Author Interview: Anthony Esolen) 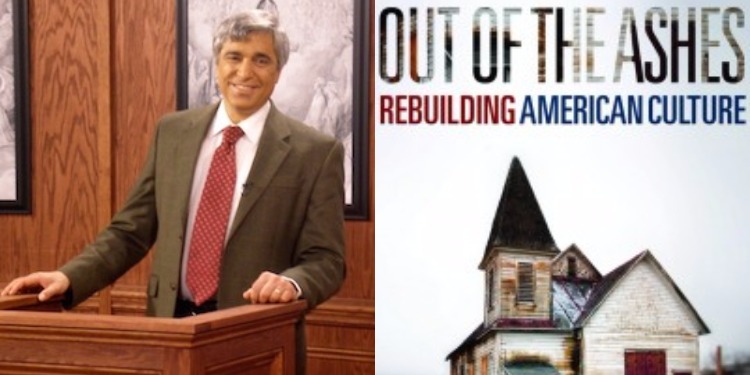 Congratulations Anthony Esolen on your new book, Out of the Ashes: Rebuilding American Culture!  Give us an overview of your book.

I’ve long been thinking about just how much of our cultural heritage, and even of a human way of living, we in the contemporary West have lost.  If I turn to my favorite old magazines from the nineteenth and early twentieth centuries, magazines like Scribner’s and The Century, I read articles, often written by people who did not have a college education, that are far too sophisticated and imply far too much knowledge of history, the arts, languages, and literature for college GRADUATES to read today.  If I look at old movies, I notice things that people of the time merely took for granted as a part of ordinary life, such as children at play without adult oversight or planning, or regular celebrations that brought the whole of a neighborhood together.

I also now see the proliferation of madness and despair everywhere, though the mad and the desperate lack the historical and cultural vantage to see themselves as such; madness and despair are all they have known.  This “despair” need not result in physical suicide; we see it in the West’s cultural death-wish, as if there were nothing more that we might bequeath to the world.  And perhaps it is true, there is nothing more – once we have severed ourselves from our religious roots.

What are 2-3 solutions of yours in restoring Western Civilization on the right path?

The first order of business is to open your eyes and look at what is right in front of you.  What, for instance?  In the late 1800’s, a man named Samuel Dike founded the Divorce Reform League, because the rate of divorce, driven up by loose laws in the new western states, had reached the calamitous level of TEN PERCENT.  One in ten; that’s all, but the great majority of Americans saw that as a black mark upon the national character and a threat to the common good.  What we have now by comparison is utter collapse.  Or take education.  Pick up a magazine written for an ordinary readership of CHILDREN – not high school graduates, but children: Boys’ Life, from its inception in 1911 through the 1930’s.  Notice the sophistication of the language, written at what now would qualify as between grade 12 and grade 14, according to the most commonly used algorithms for determining such things.  Notice the sophistication of the tasks recommended to the boys, and the adventures, and the skills.  It is as if you had walked into a different universe.  So, first business: PAY ATTENTION.  Notice what people used to be able to do.  Notice what we used to have.  Notice what we used to know.

Second: Quit thinking that all problems have a political solution, and that political problems themselves always have national solution.  Most do not, although plenty of our problems have been enabled and exacerbated by bad politics.  We cannot have a national program for the restoration of culture, because that is not how culture works.  YOU must till the soil; Washington will not do it for you, and cannot do it for you.  But you can only get to work if you understand that you are a part of the problem.  The Century’s authors took for granted that many of their readers would be able to play a musical instrument, or to read sheet music, or to listen at least to Debussy and Liszt and the rest.  Can you?  We have abandoned an inestimable treasure house of literary art.  Most of my college freshmen know nothing about poetry, which in all human cultures but ours is considered paramount among the arts.  What shall we do about our ignorance there?  If the vacant lots are really vacant and no children play – if there are far more “Children at Play” signs than there are children at play – where are your own children and what are they doing?

Third: DO something.  It’s like a bombed-out city.  If you think about the vast magnitude of the problem, you may stun yourself into inaction.  That’s a mistake.  No one person can do everything.  One person cannot even attempt to remedy more than a little, here and there.  No matter: set your hand to doing ONE thing.  The sewer has backed up and is spilling toxic waste on the streets.  If you can help fix that, do it – or maybe you are needed somewhere else, because there is no healthful bread to be had, or the toddlers have to be tended, or a roof repaired.  Do something; it almost does not matter where you, as an individual person, begin.  The crucial thing is that you do begin.

You also discuss restoring beauty, especially in art, architecture, music and worship.  What do you mean by that?

We have so little by way of great art now to “compensate” for the immense destruction of human life we have caused in the last century.  But human beings have always longed for beauty.  Only a perverse academy-supported arts “community” can persist in building things that people hate, and swindling millions of dollars out of art patrons and museums for works that nobody wants to behold, and substituting noise for melody.  That strange passion to the garish, the drab, the tawdry, and the hideous has infected even our churches.  Sane people do not build warehouses to worship in; sane people build Chartres Cathedral.  People really in love with beauty do not want to sing doggerel to off-off-Broadway show tunes and call it “folk”; they want to sing “Abide With Me” or “Praise to the Holiest in the Height.”  People who really love the town where they live do not want its downtown streets overpowered by glass and steel monstrosities that dwarf the human being and his spirit. They want even their skyscrapers, if they have to have them, to look like town halls: the Empire State Building. Ugliness is our enemy wherever it may be.

You also talk about the need to repudiate the sexual revolution, and restoring manhood and womanhood.  What do you mean by this?

Which ancient, medieval, Renaissance, or early modern society believed that the family was the nucleus of any society?  All of them did, regardless of the ways they deemed best for protecting and promoting the family. Which of them believed that you cannot protect and promote the family unless you address the reality of masculine and feminine being, which does not change with the ages and is immediately recognizable wherever you go?  All of them did, regardless of the typical expressions that manhood and womanhood would take from place to place and from time to time.

We are the only people in the history of the world to be wealthy enough to play fantasy-land with manhood and womanhood and not immediately pay the price in destruction, disease, and death.  But we eventually do pay the price; we have paid it.  What is the one thing that children in our dysfunctional cities have most in common?  Easy enough: they have not grown up with a married mother and father.  Now, the sexual revolution is predicated upon an anti-social proposition, which also happens to be a proposition divorced from reality.  It is simply that two grown people can do what they like with the most powerful and therefore most dynamic or dangerous of human drives, the sexual, and it will have NO consequences for their families, their neighbors, and the common good.  That is flatly absurd.

We pretend that sexual congress is for recreation, and that it produces children sometimes as if by accident.  That is also flatly absurd.  Sexual congress is the child-making act.  That is what it simply IS, biologically, and human children are HUMAN children, not puppies or flowers.  Being HUMAN, they do not merely float along the river of time; they dwell within time and are yet comprehenders of time, as if from the outside.  They are born into history, into culture.  They grow conscious of those who have come before them, even those who have died long before they were born, and as they mature, they will look forward to those who will come after, even those who will be born long after they have died.  It is an ABSURDITY to suppose that THAT kind of creature should be born into chaos and transience, which is what the sexual revolution gives us: a man and a woman engaging in an act of such time-transcending consequence, as if it could be done with in an hour and forgotten.

The sexual revolution does violence to the nature of man, woman, and child, and compels us to ignore the REALITY of what a human being is.  For example, we would have no argument about when human life begins, none at all, were the inception of human life dependent upon something other than sexual congress.  The ONLY reason why we pretend that we do not know when human life begins is that we want to have our fun without consequences.

Tags: Anthony Esolen, Out of the Ashes