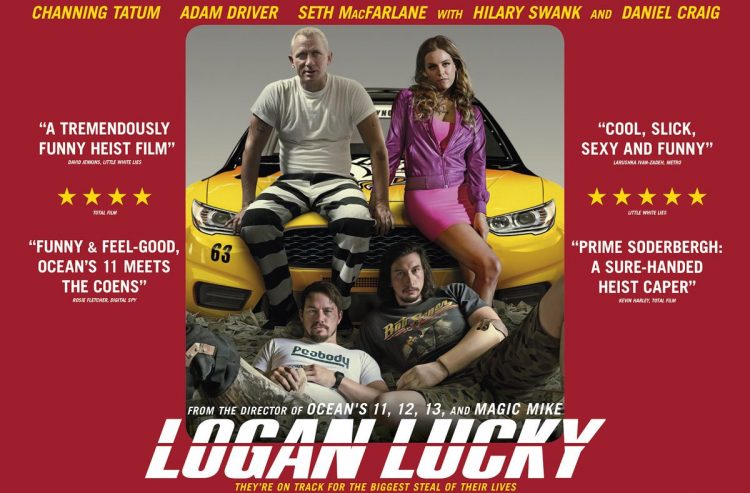 Stephen Soderbergh treads over familiar territory with Logan Lucky, his first feature film since his much-publicized retirement from feature filmmaking. Many publications have called Logan Lucky a Southern version of Soderbergh’s Oceans Eleven, a comparison the film itself acknowledges. Despite its similarities, Logan Lucky stands up to and debatably surpasses it.

As the movie begins, West Virginia construction worker Jimmy Logan (Channing Tatum) gets laid off from his job fixing sinkholes beneath the Charlotte Motor Speedway in neighboring North Carolina. His younger brother Clyde (Adam Driver) believes Jimmy’s firing is the latest strike of the “Logan curse,” a long list of bad luck that includes Clyde losing his left hand in Iraq and Jimmy losing a possible football career to injury. Jimmy isn’t convinced their family is destined for misfortune and convinces Clyde to resurrect their criminal pasts for a “hillbilly heist.” Their target – Charlotte Motor Speedway.

Unlike many caper movies, Logan Lucky doesn’t use exposition to convey the heist’s intricacies. Instead, it relies on Soderbergh’s trademark use of montage. For this reason, the movie requires a somewhat concentrated viewing, lest one miss a visual detail in Jimmy’s plan. The laughs to be had watching Logan Lucky aren’t loud, but consistent. The film’s dry sense of humor is due more to the actors’ deliveries than the words they say. During the scene where Jimmy unveils his plan to Clyde, Channing Tatum and Adam Driver display a deadpan repartee and genuine fraternal chemistry as the respective brothers.

Among the supporting players, Daniel Craig makes the rest simply look like placeholders. There are no bad performances in the film, but Craig gets to stand out with a showy performance as Joe Bang, the crew’s explosives expert. He acts against type, bringing a sense of humor seldom seen in his James Bond portrayals, and the audience can’t help but anticipate how his Southern accent will come off. As it turns out, only linguists won’t smile at Daniel Craig explaining bomb science in an affected hillbilly accent.

Some members of its massive cast are given very little screen time, most disappointingly Katherine Waterston. Waterston is irresistibly likeable as usual, but her few appearances as a physician and former classmate of Jimmy’s are extraneous. It’s curious that Soderbergh included her scenes but didn’t think to add more close calls during the actual heist, which could have used more tension.

At one point the movie’s strength of swift storytelling becomes a detriment. As more details of the heist are revealed in a montage toward the end of the film, it moves at such a fast pace that it may leave casual viewers confused. This critic needed a second viewing to pick up on certain details. Nevertheless, Logan Lucky marks a welcome return for the eclectic Soderbergh. While the heist film may not be new ground for the director, fans of Ocean’s Eleven who were disappointed by its sequels will be grateful that he has once again nailed the genre.