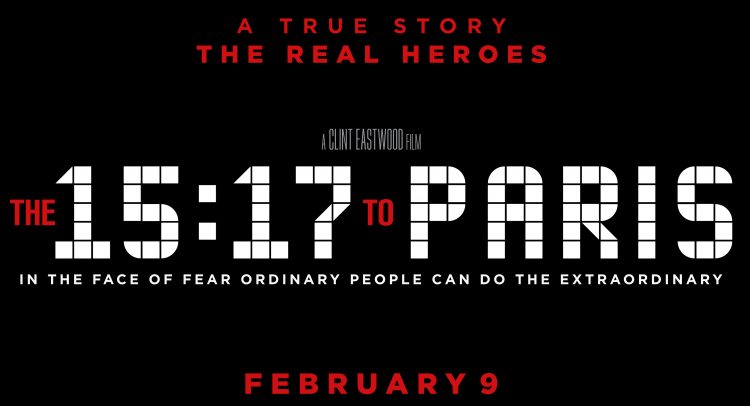 Clint Eastwood’s “The 15:17 to Paris” should have been a documentary. This telling of three young American men who disarmed jihadist Ayoub El Khazzani during the 2015 Thalys train attack is a well-intentioned misfire in the veteran director’s oeuvre that misuses his austere style.

The film proceeds awkwardly, cutting between its three principal characters’ upbringings and snippets of the fateful day on the train. It primarily centers on Spencer Stone, the first to tackle El Khazzani, and covers his troubled childhood as an unremarkable school kid, his passion for the military, and his eventual enlistment. This development seems intended to show how he grew into the type of person who would risk his life for the lives of many.

Sadly, neither the acting nor the filmmaking successfully show this. Many reviewers have deemed the casting of the real-life trio in the central roles as a piece of stunt casting rather than an example of Eastwood’s desire for authenticity. In 2009’s “Gran Torino,” Eastwood tried to get an authentic a portrayal of Hmong people by casting Hmong people as his character’s neighbors. Whichever is the case here, it doesn’t matter. Like the Hmong in “Gran Torino,” Spencer Stone, Anthony Sadler, and Alek Skarlatos are clearly non-actors who don’t quite find their groove acting for camera.

Eastwood has a reputation as a one-good-take director, an approach that may have worked against him here. Though this method has proven to work with professional actors, here it creates sporadically comfortable performances and makes the audience feel guilty for criticizing the acting of three men who deserve nothing but praise for their real-life heroism.

The child actors who play the characters’ younger selves don’t fare much better, starting the movie on a clumsy foot. “The 15:17 to Paris” eventually does hit a narrative stride when Stone prepares for his enlistment and becomes disappointed when he doesn’t qualify for the pararescue division. During this time, the film seems unsure about how to involve Skarlatos and Sadler. Curiously, the latter opens the movie with a clunky voice-over narration just to disappear for a stretch in the middle.

Eastwood’s direction is even more naturalistic than usual, and at times doesn’t look cinematic at all. Seemingly meant to ground the viewer with the trio, Eastwood uses this approach during a drawn-out sequence just before the train incident, during which Stone, Sadler, and Skarlatos vacation around Europe. This section feels like a travelogue with no narrative propulsion, and one gets the impression that Eastwood is struggling to fill the already short 96-minute runtime.

The climax aboard the Thalys train throbs with tension and is worth the price of admission, if one is willing to wade through several baggy sections. Though showcasing a good example of Eastwood’s workmanlike directing style, it feels like a different no-nonsense approach than the preceding section, like a documentary and a thriller were grafted together.

Considering the stilted acing and that Eastwood fails in constructing a feature film around a singular event, “The 15:17 to Paris” should have been the former.