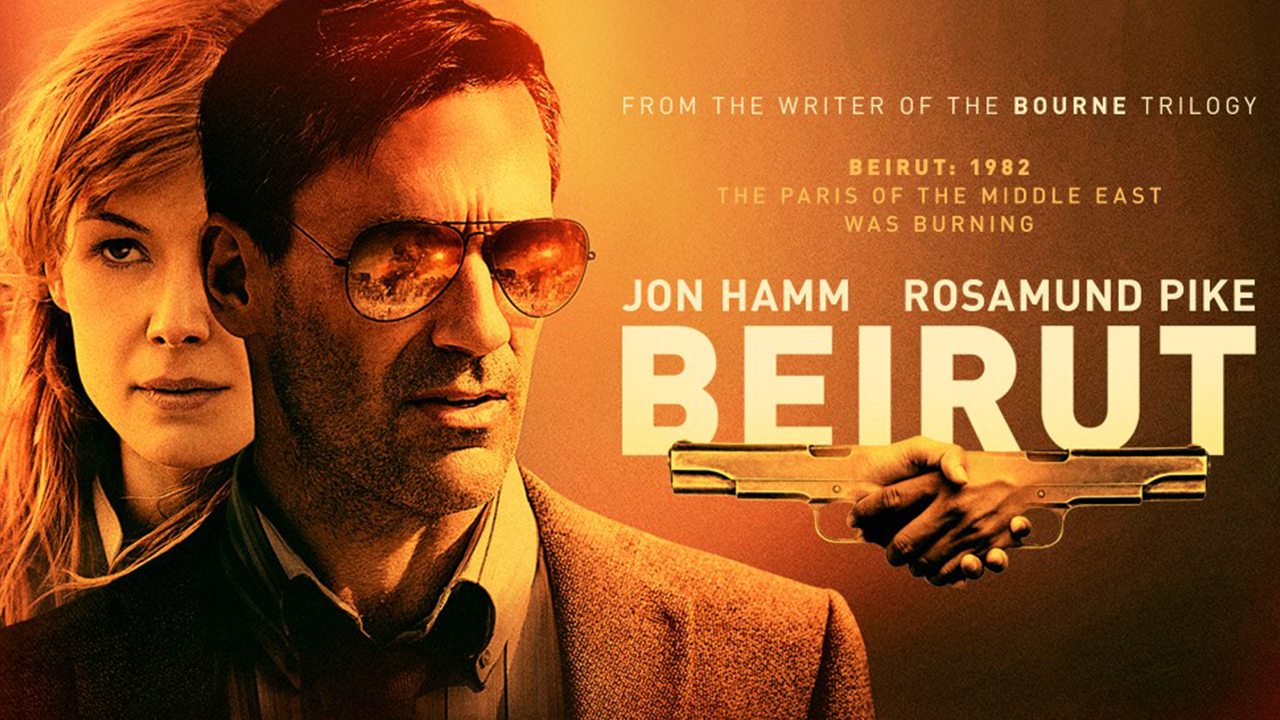 For three years and counting Jon Hamm has tried to move beyond just being recognized as Mad Men’s iconic huckster Don Draper. Though he has delivered strong performances since the AMC show ended in May 2015, one would be hard pressed to claim that any have the iconic factor of the role that made him famous. His latest turn in Brad Anderson’s espionage thriller “Beirut” doesn’t either, but it still provides Hamm an opportunity to show he’s  still a dependable leading man.

Hamm plays Mason Skiles, a United States diplomat to Lebanon whose is wife is killed when a terrorist group attacks their Beirut home and kidnaps their adopted son. A decade later in 1982, the Lebanese Civil War has decimated Beirut and one of Skiles’ old colleagues is kidnapped by the same terrorists.  Despite withdrawing from international affairs and developing a heavy drinking problem in the intervening years, Skiles is called back into action by the U.S. government to broker a prisoner exchange with the terrorists, who have for some reason requested him as an arbiter.

I won’t give away terrorists’ reason for requesting Skiles to negotiate the exchange, but those who watch “Beirut” will be able to predict it half an hour before it is revealed. “Beirut” sports enough intrigue to entertain with a historic backdrop seldom seen in movies, but the narrative has a few too many obvious moments like this, leaving one simply liking it rather than loving it.

There’s one moment where Skiles wanders free of his intelligence handlers to speak with the terrorists on his own, after which the female lead CIA agent played by Rosamund Pike gives him a belt with a transmitter so they won’t lose him again. As its established that Skiles isn’t completely trusting of the station heads he’s answering to, before he finished fastening the belt to his waist I said, “He’s gonna ditch it.” When that prophecy came true, the incompetence of Skiles’ superiors came off like a story contrivance rather than genuine governmental error.

The story itself treads over familiar territory, playing out a Reagan-era rendition of Steven Spielberg’s “Bridge of Spies” set in Lebanon. That isn’t inherently a bad thing, though, and the film depicts the complicated political relationships between various parties in the Lebanese Civil War in a way that, to the unknowledgeable at least, feels nuanced and makes one want to know more about the conflict.

Still, some elements feel extraneous, namely the revelation of a State Department officials’ corruption. This isn’t allowed the same breathing room as the other plot developments, quickly getting introduced through exposition before the climax and just as swiftly tied in a bow at the end.

Despite these flaws, “Beirut” grounds its historical context in a story that though fairly run-of-the mill, is held together by a lead character whose tragic circumstances are well set up and convincingly played. Jon Hamm as Mason Skiles doesn’t feel miles from Don Draper and during the film’s 1972 opening exhibits Mad Men levels of confidence. However, once tragedy strikes with Skiles’ wife, Hamm successfully acts with cynicism that is wearier, less full of swagger, and more like a reluctant hero.

Whether or not Hamm is a great thespian is debatable, but he is charismatic and commands attention, absolute musts for a leading man. One therefore can’t help but walk away from “Beirut” feeling disappointed that its narrative doesn’t rise to the level of his star power, rendering “Beirut” a treading water experience for Hamm rather than his next great role that fans are waiting for.