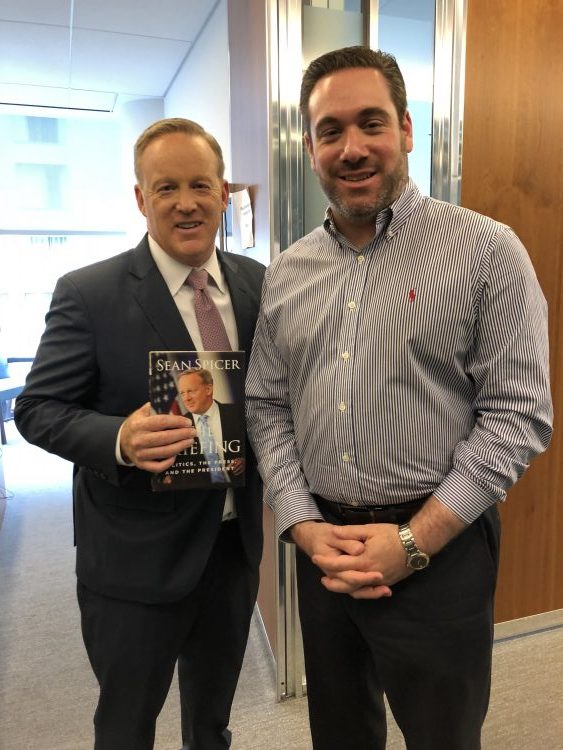 The Conservative Book Club just sat down with former White House Press Secretary Sean Spicer for a one-on-one exclusive interview about his new book, The Briefing: Politics, the Press, and the President! Check out a sneak preview and his endorsement of the Conservative Book Club in the video below.  The exclusive podcast author interview will air tomorrow, so tune back then to hear the in depth interview about his life, how he really feels about the White House press pool, the Mainstream Media, whether he was treated fairly, Melissa McCarthy and Saturday Night Live, and the challenges of being President Donald Trump’s press secretary!

While Sean hardly needs an introduction, he served as White House Press Secretary during the first seven months of the Trump administration, after serving on the 2016 Trump campaign and the Trump transition team.  Before he made his mark as one of the most recognized members of Donald Trump’s team, Spicer built a decades-long career in Republican politics, witnessing and shaping the inner workings of Washington, D.C. from every vantage point—as a House of Representatives communicator, Assistant U.S. Trade Representative, and Republican National Committee chief strategist and communications director.

He is a graduate of the Portsmouth Abbey School in Rhode Island, Connecticut College, and the United States Naval War College, he is a commander in the United States Navy Reserve.  Spicer is also the founder and president of Rigwil, LLC, a strategic consulting firm for corporate and association executives.  A frequent public speaker and commentator, he now lives with his family in Alexandria, Virginia.