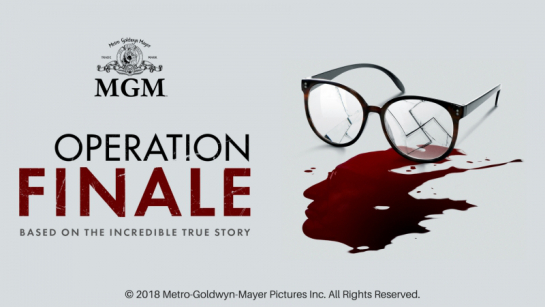 I can’t think of many movies that sound better on paper than “Operation Finale,” the story of the Israeli Mossad agents who captured former SS officer Adolf Eichmann in Argentina, where he hid after World War II to escape justice for his role as the architect of The Holocaust. Though historical films don’t do Marvel numbers at the box office, it seems like perfect fodder for a postwar thriller to satisfy history buffs and a surefire pitch that production companies would bite at. Unfortunately, I imagine much of its target audience will leave the theater disappointed that director Chris Weitz’s film fails to make the most of its fascinating subject matter.

The movie stars Oscar Isaac as Peter Malkin, who gets chosen as the Mossad team’s point man on the mission to Argentina despite having a tainted record as an agent. Before the film’s main action he kills an innocent man he and his team mistake for a former Nazi. In order to withdraw Eichmann (Ben Kingsley) clandestinely, Malkin’s doctor ex-girlfriend Hannah (Melaine Laurent) is added to the team in order to properly administer a tranquilizer and in one of the film’s secondary conflicts Malkin sees as an opportunity to rekindle a relationship with her. Though initially the mission goes smoothly, the team hits a snag when the plane scheduled to carry them out of Buenos Aires is delayed, requiring the agents to convince Eichmann into signing a document that will allow them to take him to Israel and stand trial for his war crimes. Meanwhile elsewhere in Buenos Aires, the Argentine police and Nazis residing in the city are alerted to Eichmann’s kidnapping and set out to rescue him from his captors.

Despite the weighty subjects “Operation Finale” attempts to tackle, much of it comes off as lip service toward something resembling depth rather than actual depth. This is somewhat made up for by the film’s reliable cast, as Oscar Isaac and Ben Kingsley display enough onscreen chemistry and tension to distract from the fact that writer Matthew Orton’s script doesn’t reveal that much about the psyche of a man who would organize a genocide.

“Operation Finale” does occasionally hit its stride during the scenes where the Mossad agents try to determine the best way to get Eichmann to sign the document. While Malkin feeds Eichmann, gives him a shave, and connects with him on a personal level in order to achieve this, some of his fellow agents don’t think it’s appropriate treatment for the man behind their people’s mass slaughter. The film also has some engaging moments when it seems that Eichmann is starting to convince Malkin that he was just a cog in the machine defending Germany, but these never feel like they arrive at a compelling conclusion.

One of “Operation Finale’s” greatest faults is that Isaac’s character is disappointing and feels less substantial than he should. The quasi-romantic narrative between Malkin and Hannah goes nowhere and a backstory about Malkin losing his sister to the Nazis is surprisingly weightless considering it’s The Holocaust. The mission to extract Eichmann is supposed to be an opportunity for Malkin to redeem himself for his earlier failing, but the ordeal never feels challenging enough to make the audience care if he finds redemption.

Experts could tell you what in “Operation Finale” is true or fictional, as films based on history usually require stretching or omitting certain facts for the sake of drama. Whatever the case here, the film for the most part doesn’t work as a thriller either. The Nazis hiding out in Buenos Aires remain peripheral to the Mossad team for most of the movie and lack the unhinged menace that made Ralph Fiennes scary as Amon Goth in “Schindler’s List.” Though there are some close calls toward the movie’s climax, it never generates enough tension to make one think the Mossad team might not make it.

“Operation Finale” isn’t as bad as it is unremarkable, falling into a territory of neither character study nor thrill ride. As I can’t attest to whether this is an accurate account of Adolf Eichmann’s extraction, I can’t recommend it as a primer on this historical topic either, so the film serves little function.