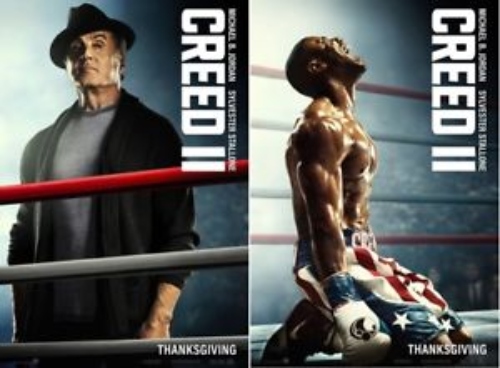 Sylvester Stallone may be “Rocky Balboa,” but a certain segment of the Hollywood community has habitually treated him like Rodney Dangerfield — he gets “no respect.” Regardless, his latest turn as the iconic boxer in Creed II earned $55.8 million over the Thanksgiving holiday — a domestic record — in large part because of his often-downplayed ability to pack scripts with heart and soul.

The world has witnessed over four decades of Rocky on the big screen, and during that time Stallone was nominated (and denied) three Academy Awards for his work on the character. He was passed over by the Academy for Best Actor and Best Original Screenplay in 1977 for Rocky, and then again for Best Supporting Actor in 2016 for Creed. The good news for “Sly,” however, is that he continues to be the cinematic version of “the people’s champion” at 72 years old.

Creed II, directed by Steven Caple Jr., aptly continues the work done by predecessor Ryan Coogler in terms of building a worthwhile world around Adonis “Donnie” Creed (Michael B. Jordan), son of the great Apollo Creed (Carl Weathers).  The screenplay by Stallone and co-writer Juel Taylor wisely invests plenty of time outside the ring exploring the motivations of Adonis and his soon-to-be wife Bianca (Tessa Thompson).

Similarly, Russians Ivan and Viktor Drago (Dolph Lundgren and Florian Munteanu) are given a backstory as intriguing as real-life UFC Champion Khabib “The Eagle” Nurmagomedov.

The plot, predictably, revolves around a challenge to Creed’s title by the young Drago. The Russian family, haunted by the personal and professional fallout from a loss to Balboa in Rocky IV (1985), want redemption, while Adonis wants closure for the death of his father at the hands of Ivan.

Adonis is pummeled without Rocky in his corner in the first title defense against Viktor, but he still wins when the rage-filled Russian is disqualified over a cheap shot. Luckily for moviegoers, Stallone’s love for the characters ensures Creed II never becomes the creative equivalent of Rockem Sockem Robots.

“You know I was thinking about what you were saying about what smart decisions have I made lately,” Stallone, channeling the greatness of Burgess Meredith’s “Mickey,” says before deciding to train Creed for a rematch. “I can’t think of many. I wasn’t even there when my son’s son — my grandson — was born. … I don’t even know him and he doesn’t know me. That’s pathetic. Listen, I don’t want you making the same mistakes I made. You know what I mean? Ask yourself, ‘What’s the valuable stuff?’ It’s like I asked you before — what were you really fighting for?

“I was afraid of this,” Creed says in a room filled with his father’s boxing trophies. “Expectations. Being a champ. I was scared I couldn’t do what he could. It’s weird. I used to feel like he was a part of me. Now I can’t hear him or that thing — that thing that tells me to get into the ring, move my feet, keep my hands up, hit anything that gets in my way. I can’t hear it anymore. I don’t even know how I lost.”

Creed II, at its heart, is about the importance of family, forgiveness, finding one’s vocation, and virtue that can be found in embracing all the pain that life has to offer. Stallone seems very cognizant of every “seen it before” pitfall in the script and then fills it with enough originality to keep momentum building to the film’s climax.

In short, Stallone has aged “Rocky” gracefully while also setting the stage for others to shine. Creed II was well worth the price of admission and a welcome addition to “The Italian Stallion’s'” universe.