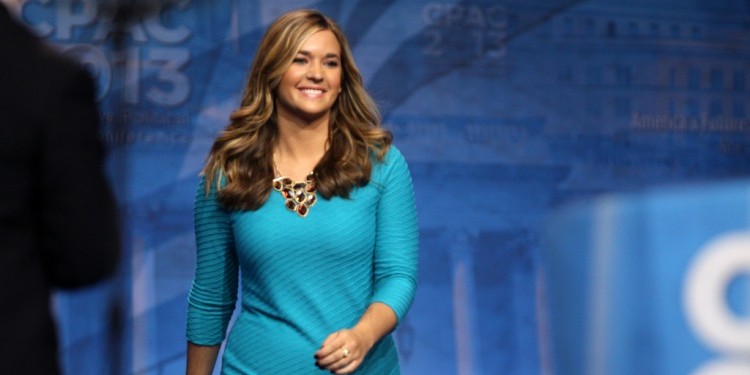 We recently sat down with bestselling author and News Editor/Writer for Townhall.com, Katie Pavlich, to talk about her latest book, Assault and Flattery: The Truth About the Left and the War on Women, and to get an update on the “Fast and Furious” scandal, which was the topic of her first book!  Ms. Pavlich also discusses the books that inspired her as a writer.

1.)  Congratulations on the recent release of your paperback edition of Assault and Flattery: The Truth About the Left and Their War on Women!  I can imagine the Left has been “flattered” by the book.  Tell us a little bit about the response you’ve gotten since you originally released it.

It’s been interesting.  Some women’s groups have tried to ignore it because they don’t believe opinions or research from conservative women really count, while others have actively organized against me during speeches or book signings.  My goal was to get the other side of the debate onto college campuses and into the hands of women.  Thanks to the Network of Enlightened Women, with book clubs on campuses across the country, I’ve been able to do just that.

My favorite moments come when women who initially disagree with my position flag me down after an event to say they’ve changed their mind, or at least see another point of view on the issue. That’s what really matters.

2.)  Indubitably!  Do you feel the Left will still be able to use the “War on Women” argument against conservatives in 2016?

They will certainly try, especially since the inevitable Democrat nominee’s only argument is, “Vote for me, I’m a woman.”

3.)  Excellent point.  What can conservatives do to counter the Left’s “War on Women” argument?

First they should read my book, which documents how the narrative was developed during the 2012 presidential campaign and the mistakes Republicans made by failing to fiercely combat it.

Second, they should study the candidates in the 2014 midterm elections who successfully defeated the narrative in races across the country.  Cory Gardner in Colorado comes to mind as someone candidates can learn from in the future.

4.)  Your first book, the bestselling Fast and Furious: Barack Obama’s Bloodiest Scandal and its Shameless Cover-Up, helped educate many citizens and keep the limelight on the “Fast and Furious” scandal.  Can you give us an update on where the investigation is at the moment?  Are any other reporters or the Republicans in congress still investigating this scandal?

Congress is still investigating the scandal, but it isn’t at the top of the priority list.  The most recent news came last year when a federal judge struck down President Obama’s executive privilege over “Fast and Furious” documents, which he inappropriately asserted in 2012 to protect Attorney General Eric Holder.

Judicial Watch has been doing incredible work investigating “Fast and Furious” and has been successful at obtaining thousands of documents Congress couldn’t get their hands on.

5.)  What books, or conservative-themed books, influenced your political philosophy and outlook on life?

I prefer to say authors and their overall body of work have influenced me.  Ann Coulter, Michelle Malkin, Thomas Sowell and Bill Buckley are among my favorites and most influential in my own writing, political outlook and life.  I have a signed copy of God & Man at Yale sitting on my bookshelf.

I think it’s important to remind people that in-depth conversations and arguments are crucial to the overall public policy debate.  With the 24/7 news cycle, it’s easy to have a short attention span when it comes to processing information, but we have to go beyond 140 characters and fleeting headlines.  Books allow us to form an argument with extensive research and serve a crucial purpose in understanding topics beyond the surface, drive-by level.