11 Principles of a Reagan Conservative 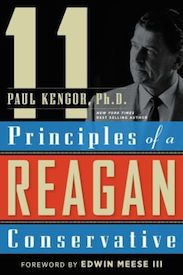 Political scientist and Reagan scholar Kengor (The Communist) sets out to answer the question “What is a Reagan Conservative?”

Reviewing Reagan’s popularity and accomplishments as President, Kengor zeros in on a 1977 speech to the Conservative Political Action Committee that outlined significant principles of the conservative movement. Kengor discusses each of the 11 principles in turn, noting how Reagan illustrated it, and why it remains significant today. Freedom, our “divine right”; faith, which he ties to optimism; and family, defined as father, mother, children, are the first principles. Kengor further lists sanctity of human life; American exceptionalism; the wisdom and vision of the Founding Fathers; and lower taxes and reduced government size. This ties to the next principle, limited government; though not in the case of the military, as “peace through strength” and anti-Communism both required significant spending.

The final principle tied to the Reagan model of conservatism is belief in the individual. Critical readers will note that many of these principles are defined in ways that require acceptance of conservative dogma, not in ways that invite discussion and open exchange of ideas. When Kengor relates these principles to contemporary debates such as same-sex marriage, he rather flatly predicts Reagan’s stance. Excerpts from Reagan’s speeches comprise the second half of this slim volume. Recommended for Conservatives who wish to have a stronger understanding of the ideas that drove policy during Reagan’s administration.