Conservative Book Club » Bestsellers » A More Perfect Union: What We the People Can Do to Reclaim Our Constitutional Liberties

A More Perfect Union: What We the People Can Do to Reclaim Our Constitutional Liberties 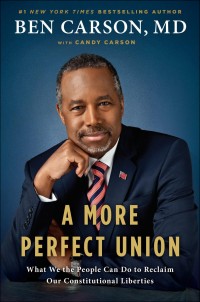 In A More Perfect Union: What We the People Can Do to Reclaim Our Constitutional Liberties, Dr. Ben Carson provides his readers with a clear and simple explanation of the principles and text of the U.S. Constitution. He believes that many people in our nation, government officials and voters alike, lack a fundamental understanding of our founding documents. As a result, our constitutional liberties are being compromised and often ignored.

Carson is an accomplished neurosurgeon and a leader in his field in several respects, not the least of which is being the first doctor to successfully separate conjoined twins. As with any profession involving advanced training, the price of specialization is facing skepticism as an authority in areas outside one’s domain of formal training. Carson writes, “There are many today who think that doctors should stick to medicine and cannot possibly know anything about any other area of life.” Carson clearly disagrees, seeing as he is a doctor running to be President of the United States.

Starting with the Preamble and moving the through each of the Articles and Amendments, Carson unpacks the meaning of each section of the Constitution while sharing his views on important issues, including: freedom of speech and religion, the definition of marriage, Second Amendment rights, government spending, and more.

He provides a perspective which will be unique to some readers- as the son of a single-parent mother, he was raised in poverty, and his views of justice and freedom were shaped by early childhood experiences. He shares how his view of freedom has developed, what values that his mother imparted have remained the same, and how life events have formed and matured his views on controversial topics.

Carson writes at a time when prior elected experience has made candidates and elected officials very suspect in the eyes of the citizenry. Perhaps his perceived weakness is his greatest strength: America wants a leader who is devoid of vapid political-speak and ready to champion the liberties of people outside the Acela Corridor. As a champion of freedom who has demonstrated ability to serve others in various roles, Carson may be better suited to understand our country’s constitutional crisis than those who have unwittingly shaped it.

There have been other presidential hopefuls who have practiced medicine, and demonstrating a solid understanding of the U.S. Constitution has made some of these a more viable choice for an elected office. Carson writes, “Our founding fathers didn’t want a permanent governing class of professional politicians. They wanted a republic…” Fortunately for America, he stands in a line of accomplished men and women outside of politics who are willing to fight for freedom.

Perhaps previous debates about the power of the pen and the sword should be revised to determine the comparative might of the mind and the scalpel. As Carson quips in the book, “Five doctors had signed the Declaration of Independence, and as highly educated individuals they were deeply involved in local and national affairs during the early days of our nation.”

A refreshing perspective on the duty of elected officials to preserve and champion the constitutional liberties of those who elected them.
Original CBC review written by Jason Isaacs.