Advise and Consent: A Novel of Washington Politics 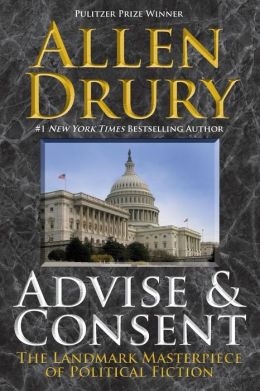 The great game of politics is played in Allen Drury’s “Advise and Consent” for, the ultimate stakes of life and death. This is the best novel about Washington I have ever read. It is set in the future. But every page crackles or murmurs with over-tones and undertones of events in our own time.

At the heart of Mr. Drury’s story is a Senate battle over a President’s nomination for Secretary of State. The man is, in the cant phrase, a controversial figure. And so are all the other leading figures—the Senators, the Ambassadors, the Justice of the Supreme Court, the Vice President, who is, as usual, alternately snubbed and exalted, the dutifully glittering hostesses who stand, predictably, as arbiters of Washingtonian elegance, particularly the elegance of electoral politics, which is so often the triumph of the protocolic over the bucolic.

Once the fight over the nomination is well • and fiercely joined, its clamor stirs the world. But since Washington—that center of stately homes of uncertain tenure—con-siders itself the world, Mr. Drury is able to concentrate his drama there. He misses no gesture of significant action, from the White House to the Capitol, no decibel, of signifi-cant sound from the droning of a politician’s obligatory speech to the sardonic moaning at the Press Club bar.

We have, in this country, an office not named in the Constitution or any statute. It is the office of Chief Demagogue, and it has been filled by some peculiar and dangerous characters down the years. In “Advise and Consent.” it is occupied by a venomous charlatan in the Senate who rises to a position of lethal eminence on the tide of a national movement called COMFORT – Committee on Making Further Offers for a Russian Truce. “As for me,” he says, “I had rather crawl on my knees to Moscow than die under the atom bomb!”

In this phase of the book you may recall the days just after World War II when howling mass meetings were being told that it was a warmongering crime to get tough with the Bolshies. Then came the rape of Czechoslovakia. And Hungary. And, most recently, Tibet. To mention a few.

Now, in Mr. Drury’s story, it seems that the Muscovites are about to establish an armed Kremlin exurbia on the moon. And this country, which has never ceased to be assailed for lack of complacency in being first with the atonic bomb, is assailed in reverse (as it was over the sputniks) for being overcomplacently slow about a moon landing.

The controversial nominee for Secretary of State is known to be inclined to favor patting the Russian tiger. The Senate com-mittee looking into his qualifications is disturbed by that. It is even more disturbed when he tells lies about his past membership in a cell formed by dreary Marxists. Never-theless, his nomination might have gone through if an idealistic young Senator who was guilty of a faraway moral lapse had not also had the past rise up and confront him fatally.

This is the moment for ultimate command decisions. Neither tin tremendous fortes commanded by the White House nor the forces commanded by the Senate will yield with any willingness. There are, however, infinitudes of maneuvers open to both—and it is in showing how savagely they are car-ried out that Mr. Drury, a member of the Washington bureau of The Times, shows us the inner turmoils of Washington with in-comparable clarity.

He proves here, if proof is needed, that the novel is the best of all ways to interpret modern life. A dozen books on Washington politics written in what we may indulgently call completely nonfiction form can’t match “Advise and Consent” in telling us how our politicians and statesmen—the patricians, you might say, of the servant classes—live and think and work and affect mankind’s destiny.

Reality on the Potomac

It has taken me about three weeks, off and on, while other books were occupying my reviewing time, to read “Advise and Consent,” and I’m glad I read it so slowly. That way, the lives of the main persons concerned have unfolded page by page—so much so that Washington, an extraordinarily implausible place when I lived there, has at last taken on for me the reality of human life. But the disadvantage of this leisurely system of reading, of course, is that you are able to guess how almost everything in the book is going to come out, so prodigally has Mr. Drury strewn his pages with clues to the future.

Clues to the future of his story, with ita lengthy life histories of everyone, its jubilantly frank view of the politician’s—and the newspaper man’s–modus of vivending along the unquiet Potomac. And also clues to the future of America about which we may, paradoxically, show, with prudence. every concern and no concern. For this country is so great that it survives both those who would save it and those who would destroy it. With or without advice or consent from various quarters.

These are the great abstractions. But Mr. Drury has primarily written a book about human beings. And I don’t think anyone who reads it will remember anything in the book longer than the scene where one of the men about- to die says good-bye to his small, impudent daughter, Pidge.