America: Imagine a World Without Her 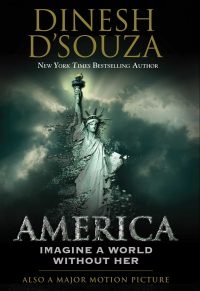 Is America committing suicide?  Bestselling author and successful filmmaker, Dinesh D’Souza, explores this question and its shocking answer in his new book America: Imagine A World Without Her.  In his follow-up offering to his successful movie 2016: Obama’s America, D’Souza meticulously lays out the progressive critique of America’s history and methodically rebuts each of their principal arguments.  While more than just the typical political conservative commentary, America passionately defends America as an “Empire for Liberty” and makes a powerful case for Alexis de Tocqueville’s idea of American Exceptionalism.

Although the book is subtitled Imagine A World Without Her, like its recently released movie version, it ironically spends little time exploring this notion.  Instead the book can be broken down into three parts: 1.) The origins of the conservative and progressive philosophies, 2.) Rebuttals to progressive critiques of perceived American oppression, and 3.) A defense of American capitalism being a force for good in the world.

The cornerstone of D’Souza’s argument focuses on the ideas of “theft” and “ownership.”  To the progressive, America’s success was built off the exploitation or “theft” of certain groups throughout its history.  The early settlers stole the country from Native Americans, stole the labor from African Americans, stole half of Mexico in the US-Mexican War, and to this day steal from third world countries through American capitalism.  D’Souza gives much credit to American historian, Howard Zinn, and his influential manifesto A People’s History of the United States, for propagating such views in American classrooms today, or what he calls the “Spirit of 1968.”

To atone for its sins, progressives intonate America must be fundamentally transformed, or what President Obama terms, “the work of remaking America.”  But to what end?  D’Souza states:

“The term progressive suggests a commitment to progress.  Progress implies change, and Obama’s 2008 presidential campaign slogans all focused on “change.”  But change in what direction?”

While D’Souza fully admits the history of the United States is not perfect, he feels that the “theft” indictment is unfair, is not the whole story, and has never been comprehensively answered.

D’Souza believes the “Spirit of 1776” and the fundamentals of American constitutionalism has allowed America to prosper.   Because of this, one of America’s greatest gifts to the world was its “invention of wealth creation” through its promotion of private property “ownership” as a natural right instead of a right bestowed by the government or monarchy, thus enabling individuals to follow their own pursuits of happiness.  Progressivism challenges this pretext and is actively trying to transform America from within, or as D’Souza calls it, “committing suicide” in order to be reborn.

The genius of D’Souza is that he uses the language of progressives to boondoggle their own arguments.  By using the logic progressives employ in determining certain socio-economic outcomes, progressives will find themselves rhetorically tongue-tied after reading this book, if they read it.  My only criticisms of the book would be the repetitious nature of describing American capitalism throughout the third part and the unique juxtaposition of the eccentric Michael Foucault with the much revered Alexis de Tocqueville in chapter two.

The book will certainly provide rhetorical fodder for those on the right, thoughtful contemplation for the independent-minded, and no doubt chastisement from the left.  If America is about to commit its suicide, there’s no time to waste to get this in the hands of every liberty-loving American!

Tags: America: Imagine a World Without Her, Dinesh D'Souza