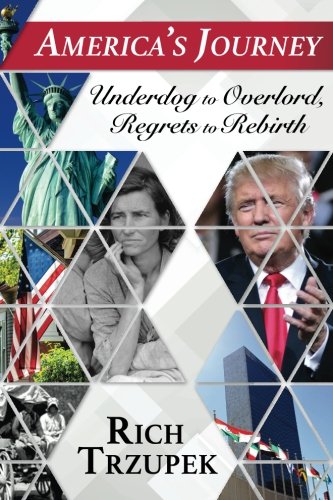 Check out a special audio introduction to America’s Journey from author Richard Trzupek below!

“I feel blessed to live in America, and this work is my tribute to the story of the country that I love, a story that I fear is being lost amidst a barrage of purposed, revisionist mudslinging in the academic community. This book is also my examination of how and why the cancer of American self-loathing developed. I make no apologies for loving my country, or for scorning those who choose to inflate its flaws and ignore its accomplishments.”

Over the last decades, America’s self-perception changed from idealistic hero to heartless bully. Will our apologetic stance stick, or can our nation unify and rally ’round the core beliefs that made it great?

From John Muir to Chicago and Barack Obama, Nikola Tesla to Tom Wolfe and The Electric Kool-Aid Acid Test, America’s influential leaders and quirky personalities reflected the goals, opportunities, and challenges of each era. In the early centuries, adaptive tactics succeeded, innovation abounded, and virgin territory beckoned. Exceptionalism was a source of pride, proof of America’s rebelliousness against European traditions. Americans viewed themselves as hard-working up-and-comers–nothing more, and certainly nothing less. But twentieth-century global conflicts drew them from their isolated paradise into the muck of war, and America’s dominating, earth-shattering strength created a mantle of superiority and accompanying remorse. Any sheen of national unity withered away as political, racial, economic, technological, generational, and religious conflicts shaped our discourse and choices.

In a delightfully easy, personable style, Rich Trzupek illustrates the good and the bad of our nation’s character through the ages, drawing on obscure, fascinating stories about unsung heroes and the extraordinary issues that have brought us to this virulent debate over America’s values…and its future. An unabashed believer in America’s resilience, Trzupek argues how the election of Donald Trump represents a rejection of the recent apologist attitude, and hopefully sets the stage for a return to the traditional patriotism that created America’s greatness.

A must-read if you wonder how the spirit of self-loathing, relentless accusations of Islamophobia, and schizophrenic media ever developed. Delve into the essence of America’s key moments without wallowing in irrelevant historical details, and be inspired all over again.