Conservative Book Club » Politics & Current Affairs » Ball of Collusion: The Plot to Rig an Election and Destroy a Presidency

Ball of Collusion: The Plot to Rig an Election and Destroy a Presidency 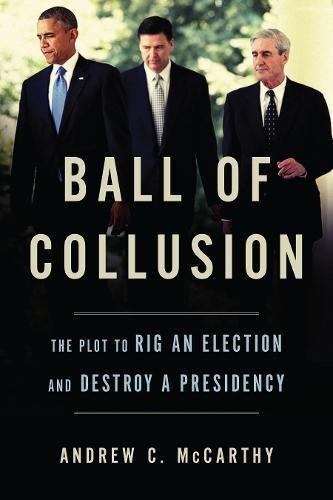 The law-enforcement and intelligence arms of government were placed in the service of the Democratic presidential bid and, failing that, were deployed against the incoming Republican administration, with the goal of strangling it in the cradle.

The media-Democrat “collusion narrative,” scandalizing Donald Trump as cat’s paw of the Russian regime, is a studiously crafted illusion.

As Secretary of State, Mrs. Clinton fashioned a homebrew email system to conduct State Department business. Inevitably, she illegally transmitted classified intelligence, destroyed tens of thousands of government files, and obstructed investigations. Yet, the Justice Department and FBI “exonerated” her, carrying out the will of President Obama, who had endorsed Clinton to be his successor and freely exchanged sensitive emails with her.

Despite Clinton’s commanding lead in the polls, hyper-partisan intelligence officials decided they needed an “insurance policy” against a Trump presidency. Thus was born the Trump-Russia collusion narrative: built on an anonymously sourced “dossier,” secretly underwritten by the Clinton campaign and compiled by a former British spy with links to the FBI and the Obama Justice Department. Though acknowledged to be “salacious and unverified” at the FBI’s highest level, the dossier was used to build a counterintelligence investigation against Trump’s campaign. Desperate to derail Trump’s candidacy, political and intelligence operatives leaked the probe to the media.

Miraculously, Trump won anyway. His rabid political opponents refused to accept the voters’ decision. Though the collusion narrative had barely registered with the electorate, it was now peddled relentlessly by political operatives, intelligence agents, Justice Department officials, and media ideologues – the vanguard of the “Trump Resistance.” Through secret surveillance, a sophisticated scheme to enable intelligence leaking, and tireless news coverage, the public was led to believe the Trump campaign had conspired with Russia to steal the election.

Not one to sit passively through an onslaught, President Trump fought back in his tumultuous way. Matters came to a head when he fired the FBI director, who had given explosive Senate testimony suggesting the president was a criminal suspect, despite privately assuring Trump that he was not. The resulting firestorm of partisan protest cowed the Justice to appoint a special counsel, whose seemingly limitless investigation has bedeviled the administration ever since.

Yet as months passed, concrete evidence of collusion failed to materialize. Was the collusion narrative an elaborate fraud? And if so, choreographed by whom? Against Democrat-media caterwauling, a doughty group of lawmakers forced a shift in the spotlight from Trump to his investigators and accusers. It has exposed the thoroughgoing politicization of American law-enforcement and intelligence agencies. The institutions on which our nation depends for objective policing and clear-eyed analysis had injected themselves into the divisive politics of the 2016 election.

They failed to forge a new Clinton administration. Will they succeed in bringing down President Trump?