Conservative Book Club » Politics & Current Affairs » Barons of the Beltway: Inside the Princely World of Our Washington Elite–and How to Overthrow Them

Barons of the Beltway: Inside the Princely World of Our Washington Elite–and How to Overthrow Them 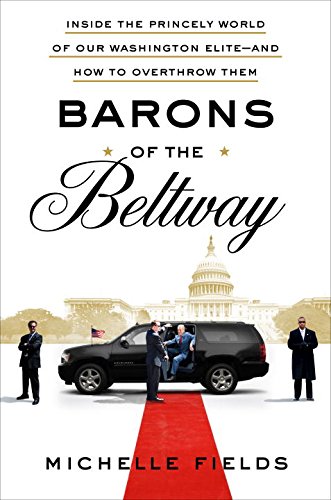 From reporter and Fox News star Michelle Fields, a revelation of how the corruption and waste in American politics begins with our elected politicians, and how to take the country back from those that extort its values for personal gain

Our Founding Fathers rejected the notion of royalty and fought against extravagance, pomp, and circumstance. But today in Washington, members of the United States government enjoy lifestyle perks that would make Marie Antoinette envious. Our public servants are chauffeured to their Capitol Hill offices by town cars even when they live only two blocks away. They enjoy their own taxpayer-subsidized Senate Hair Care Services, vacation with their families in exotic locations for free, and exempt themselves and their friends from the laws that they create.

In Barons of the Beltway, Fox News contributor Michelle Fields exposes the hidden perks, the freebies, and the ego stroking that define life for a political class that is out of touch and out to lunch. Put under the spotlight are figures such as Congresswoman Nancy Pelosi, Senate Minority Leader Harry Reid, and Vice President Joe Biden, who continue to abuse their power, build their personal fortunes, and climb up the Washington ladder. And, while our Founding Fathers started a revolution to break away from a monarchy, it’s clear that America is beginning to have one of its own.

Barons of the Beltway reveals how to overthrow our political class in order to return to the principles the Founding Fathers originally envisioned for America—a country of greater opportunity that we can pass onto the next generations.