Cheney: The Untold Story of America’s Most Powerful and Controversial Vice President 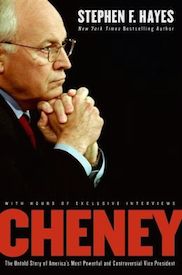 Don’t you think your book will have to be a hatchet job in order to have credibility?” a top White House correspondent asked Stephen Hayes as he was researching his biography of Dick Cheney. A “hatchet job” on Cheney would have followed the well-worn path of his media coverage over the past six years— but Hayes’s engaging account tells The Untold Story of America’s Most Accomplished and Experienced Vice President.  There was a time when this substitute subtitle of mine could have won the unanimous endorsement of the National Press Club’s membership. The caricature they have since embraced—of a reckless, malevolent, power-hungry Dick Cheney— is impossible to reconcile with the man whose remarkable career Hayes so ably explores.

When he returned to Washington in 2001, Dick Cheney was no stranger to the city’s press corps. A thick file of old clips chronicling his 25 years in the capital (which it’s impossible to imagine he would bother preserving) would reflect an earned admiration for his singular achievements. With both fresh material, including unprecedented access to the famously reticent Cheney for 30 hours of interviews, and a well-researched examination of his experi- ences and views, Hayes portrays a vice president who remains the serious, temper- ate, and thoughtful individual who headed east as a budding political scientist so many years ago.

Cheney outlined the ethos responsible for his success in remarks to last year’s graduating class from his (and his accom- plished wife, Lynne’s) high school in Casper, Wyo. He advised the teenagers: “Stay focused on the job you have . . . take your present job seriously. Do the work in front of you. Try to find ways to make your- self indispensable.” Cheney’s uncommon approach to his career—at odds with that of the typical politician, who seeks more power and craves more attention—is re- sponsible for the repeated refrains of “Get me Dick Cheney” from presidents, con- gressional leaders, and corporate CEOs.

President Bush confirms that their rela- tionship reflects the value and influence of an intensely loyal vice president with- out his own personal agenda or political ambitions. But Cheney does have his own views, and Hayes reveals how they differed from the deci- sions made about both the occupation policies and mili- tary strategies in Iraq.

The bare facts of Dick Cheney’s résumé reveal his talent. In 1969, he went to work on an academic internship for a junior member of the House minority, and six years later, at age 34, he was among the most powerful men in the country as chief of staff to President Ford. In his welcome tonic to the toxic coverage Cheney currently endures, Hayes provides startling reminders of the accolades he once enjoyed. In a note to Cheney two weeks before Jimmy Carter’s inauguration, the White House press secretary expressed his personal gratitude for the chief of staff’s “extremely able” efforts. Ron Nessen wrote, “I know that your own very good relationship with the press reflected favorably on President Ford’s good image among reporters and also helped my White House Press Office over some of the rougher spots.”

In only his second term as Wyoming’s sole representative in the House, Cheney held the fourth-highest position in the GOP leadership. By 1988, he was second in command of his caucus, the presumptive favorite for minority leader and widely viewed as most likely to be the next Republican Speaker of the House. He was a natural pick for the editors of U.S. News & World Report, who included Cheney among the “Best of the Hill” and described him as “the Republicans’ most articulate, reasoned spokesman.”

In 1989, he resigned from the House and was unanimously confirmed by the Senate as secretary of defense. Reflecting the enthusiastic, bipartisan support for one of Washington’s most admired politicians, Sen. Al Gore congratulated President Bush for his selection of Cheney; Sen. Ted Kennedy declared, “America’s defense policy is back on track.” The Washington Post’s David Broder praised the “superb choice,” explaining that “Cheney is smart, he is tough, and he is totally trustworthy.”

Cheney’s interest in a presidential bid in 1996 prompted more press accolades. “One of Cheney’s strengths, all GOP pros agree, is that he has no detractors,” wrote Morton Kondracke in Roll Call. Kondracke also noted that, in addition to enjoying broad support among his own party, Cheney was “well-liked by the press and the bipartisan Beltway establishment, which is unusual for a Republican.” Broder highlighted the many assets Cheney would bring to the race: “a sense of gravity, seriousness, competence, and self-confidence, unmarred by either pomposity or obvious self-promotion.” Broder quoted a former Democratic congressman who served in the House with Cheney: “I trust Dick, and so does damn near everyone who knows him.”

Cheney remains amused that his fans in the media managed to overlook his “more conservative than most people realized” congressional record. “The press never looked at my voting record,” he explains. “They thought I was all warm and fuzzy and they never looked to see.”

In recounting Cheney’s early experiences, longstanding convictions, and firm attitudes, Hayes demonstrates that the vice president hasn’t undergone a metamorphosis that would justify the media hostility that is his daily fare. In 1974, for example, when the Ford White House was facing the Church Committee’s investigation of alleged CIA misdeeds, Cheney—as deputy to chief of staff Don Rumsfeld—worried about “legislative encroachment on exec- utive power.” He later argued with his congressional colleagues in defense of President Jimmy Carter’s prerogatives, especially in the use of military force. When James Baker sought his advice, “restore power and authority to the executive branch” topped Cheney’s list of priorities for Reagan’s incoming chief of staff.

In their first meeting after the inauguration, Vice President Cheney told his counsel that his one job was to restore the power of the presidency. In the early months of the Bush administration, Cheney refused to provide Congress with details about the inner workings of the Energy Task Force he chaired. In what would become a familiar pattern in countless later controversies about the Bush administration, his refusal set off a firestorm of ill-informed outrage bolstered by misleading press accounts— and would later be vindicated. (The Supreme Court upheld his position in a 7–2 decision.)

When Congressman Cheney served on the House Intelligence Committee he would occasionally visit CIA headquarters to discuss their findings and conclusions, winning the praise of agency officials for his diligence and thoroughness—but, after he became vice president, his trips to Langley for in-depth briefings were portrayed by his critics as blatant attempts to intimidate analysts in order to manipulate pre-war intelligence on Iraq. Hayes’s detailed accounts of these and similar allegations provide a convincing refutation of the media narrative that has so unjustly tarnished Cheney’s well-deserved reputation.

Stephen Hayes reminds us that Vice President Cheney assumed office with a rare, sophisticated understanding of the strengths and limitations of our national- security institutions. Since 9/11, his daily obsession is the “hell of a threat” we face in the War on Terror. Now that his story has been told, a grateful public should recognize their good fortune in having the vice president we have at such a perilous time.

Book Review from The National Review, by Kate O’Beirne