Churchill’s Trial: Winston Churchill and the Salvation of Free Government 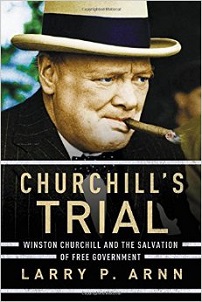 Throughout his lengthy political career, which spanned more than 50 years, Winston Churchill navigated some of the most harrowing events in modern history. Tyranny in the form of Nazism and Communism, Soviet domination of Eastern Europe, and the drift toward socialism in the U.K. are just some examples. Fortunately for modern day man, Churchill left behind a treasure trove when it comes to historical records. He authored over 50 books, wrote more than 8,000 pages of speeches, and penned an innumerable amount of articles. His wellspring of writing provides both a great opportunity and a great challenge for understanding such a complicated statesman, however.

In his exhaustively researched book, “Churchill’s Trial: Winston Churchill and the Salvation of Free Government,” Hillsdale College President Larry Arnn makes sense of the former prime minister’s seemingly contradictory nature in what will likely be regarded as one of the most important political analyses of this great statesman.  The book is not strictly a biography so much as it is a glimpse into the history, psychology, and political worldview of a man who, despite his many failures, is thought of today as one of the most revered figures of the 20th century.

Arnn examines the trials Churchill faced at home and abroad in three parts: War, Empire, and Peace. The first part, consisting of four chapters, lays the foundation to understanding Churchill’s view of war, going as far back to his time as a soldier in combat and as a war correspondent, looking at his experiences in Sudan and South Africa. What we see emerge is a picture of a man who was calm in the storm, calculating, and courageous. But he was equally fearful of war, which deepened and extended throughout his life, Arnn noted.

Early anxieties about advancements in war are on full display in a 1924 essay he wrote titled, “Shall We All Commit Suicide?” in which Churchill laments mankind’s ability to destroy itself. This fear grew more acute with modernity, given its greater technological advancements and, eventually, nuclear capabilities. Realizing the impossibility of unmaking these advancements, Churchill knew the only way forward was to manage them.

The second part of the book transitions to how Churchill viewed the British Empire, which, according to Arnn, “was inseparable from his strategic view of British safety and world influence.” Churchill was an unapologetic imperialist, seeking to preserve the empire throughout his lifetime. The sole chapter in this section includes a lively discussion about Churchill’s view of British rule over India, at first as a proponent, and then his later opinion that it was a “burden” on Britain economically, taking what Arnn called a “prudential approach to moral duties.” While many of Churchill’s judgments about British rule are questioned today, Arnn presents fair and balanced counterpoints throughout.

Finally, the last section of the book focuses on the trials he faced during peacetime, including British socialism, which he vehemently opposed. Part of his strategy to defeat the lure of socialism was to take up the role of social reformer, helping the infirm, the poor, and the elderly. This required a delicate balance of redistributing wealth from the rich to the aforementioned, but doing so in a way that wouldn’t undermine British society’s freedom, free markets, and limited government. While this seems to be another one of Churchill’s contradictions, Arnn goes to great lengths to elucidate his positions for the reader.

Though Churchill died 50 years ago, and the trials he faced were distinctly different from those of modern times, there remain many constants, such as war and a government that seems to grow bigger by the day.  Thus, in many ways, “Churchill’s trial is also our trial,” Arnn concludes. Fortunately, he adds, “[w]e have a better chance to meet it because we had in him a statesman.”