Clinton Cash: The Untold Story of How and Why Foreign Governments and Businesses Helped Make Bill and Hillary Rich 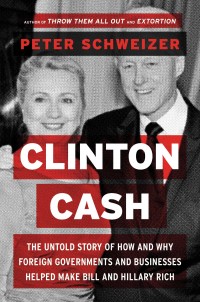 When it comes to political and financial scandals touching Bill and Hillary Clinton, it’s what fighter pilots call “a target-rich environment.”  To go back a bit in history, in the 1990s there were some Clinton scandals (Whitewater, cattle futures) that involved money flowing to the Clintons personally, but by and large, what really mattered were the illegal foreign campaign contributions either to a specific Clinton campaign organization or a Democrat National Committee entity.

For example, my co-author and I co-wrote Year of the Rat (Regnery, 1998), a New York Times Bestseller, which revealed the millions of dollars in illegal foreign campaign contributions to Clinton campaigns and the DNC, many of them associated with Chinese military intelligence and gangsters from Macao.

In the final days of his Presidency, while Bill Clinton was at the White House hurriedly pardoning drug dealers and weapons smugglers, across town his Justice Department was frantically closing illegal campaign contribution cases before George W. Bush could be sworn in.  Something north of fifty people either pled guilty to campaign finance violations or fled the country.  As part of his plea deal, Clinton intimate John Huang told the FBI that his boss had pledged $1 million to Bill Clinton in the back of a limousine.

The other change from the 1990s is the unprecedented size of the Clinton operation. As Mr. Schweizer put it, “No one has even come close in recent years to enriching themselves on the scale of the Clintons while they or a spouse continued in public office” (p5).  Whereas the illegal foreign campaign contributions of the 1990s brought them to the dance by getting them elected, the Clintons are now in a position to cash in on a monumental scale.

Discussing his book with Howard Kurtz of Fox News, Mr. Schweizer made the following points about Clinton Cash:

”What we are looking at here is a pattern of behavior.”

“It is ‘the power of the stories’ in the book that matter.”

Another aspect points to is the origins of the money: “The Clintons’ most lucrative transactions” originate not in the United States or Great Britain where “business and politics are kept separate,” but “in parts of the world where corruption and payoffs are simply a part of doing business.” [p17] In short, according to Mr. Schweizer, the Clintons have imported dodgy business practices from despotic regimes abroad and injected them into the American political system in the form of an avalanche of money.

Even before publication, the press has been chasing many of the “stories” which Mr. Schweizer identified as holding up the book. But the press hasn’t noticed everything. For example on page 53 is this passage from the book:

“In January 2009, while at the World Economic Forum in Davos, Bill had gone to Putin’s private party at the Sheraton, where he was greeted by the Russian leader as ‘our good friend’ before cheering him with vodka shots. The pair then headed off to a private room where they ‘talked deep into the night.'”

Bearing in mind, at that very moment, then-Senator Hillary Clinton was negotiating her confirmation as Secretary of State with the Senate Foreign Relations Committee.  This would make for a good question for the inevitable Congressional investigation.

Clinton Cash is a brilliant book, a good read and something for every American patriot’s bookshelf.