Closing of the American Mind: How Higher Education Has Failed Democracy and Impoverished the Souls of Today’s Students 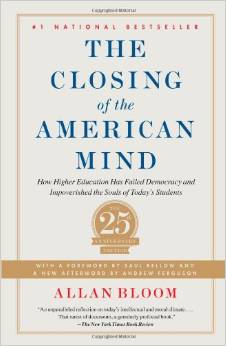 Allan Bloom, a professor of philosophy and political science at the University of Chicago, is perhaps best known as a translator and interpreter of Jean Jacques Rousseau’s ”Emile” and Plato’s ”Republic,” two classic texts that ponder the relationship between education and society. In ”The Closing of the American Mind,” Mr. Bloom has drawn both on his deep acquaintance with philosophical thinking about education and on a long career as a teacher to give us an extraordinary meditation on the fate of liberal education in this country – a meditation, as he puts it in his opening pages, ”on the state of our souls.”

Let me say at the outset that ”The Closing of the American Mind” is essential reading for anyone concerned with the state of liberal education in this society. Its pathos, erudition and penetrating insight make it an unparalleled reflection on the whole question of what it means to be a student in today’s intellectual and moral climate. But such qualities also make the book difficult to summarize briefly. Mr. Bloom ranges freely over centuries of thinking about freedom, values and the ends of education, moving with ease (to quote one of his more ambitious chapter headings) ”From Socrates’ Apology to Heidegger’s Rektoratsrede.” Yet the book’s scope and considerable learning have not made it any less immediate or compelling. In fact, one of the things that distinguishes it is its successful blending of erudition with great particularity. Among the more noteworthy examples of the latter is Mr. Bloom’s harrowing description, near the end of the book, of his experiences at Cornell University in the late 1960’s when students seized buildings at gunpoint, held professors hostage and intimidated a pusillanimous administration into a policy of appeasement.

As his title suggests, Mr. Bloom’s assessment of liberal education is not optimistic. In essence, he argues that over the last 25 years the academy has all but abandoned the intellectual and moral principles that have traditionally informed and given substance to liberal education, becoming prey to the enthusiasms – increasingly politicized – of the moment. While the eruption of violence and political activism in the 60’s marked the high point of those enthusiasms, in Mr. Bloom’s view, the university has yet to recover from the aftereffects of those disruptions. And because the university epitomizes the very spirit of free inquiry, which in turn is at the root of a free society, he concludes that ”a crisis in the university, the home of reason, is perhaps the profoundest crisis” for a modern democratic nation.

Mr. Bloom devotes a large part of the book to analyzing the character and intellectual disposition of those students who form his main subject and raison d’etre, liberal arts students ”who populate the twenty or thirty best universities.” Among much else, he describes the extent to which even such privileged students have in recent years ”lost the practice of and the taste for reading,” forsaking the companionship of books for the more accessible but less sustaining pleasures of movies and rock music. He discusses how changes in the family, especially the high incidence of divorce, have impinged upon the character of students, leaving them at once more cynical and less questioning, less critical. And he considers how the revolution in adolescent sexual mores not only wrought radical changes in sexual attitudes and behavior, but also has tended to dampen what Plato described as the ”erotic” element in education, the element of mystery and longing that has always been part of the excitement of discovering the world of liberal learning.

In all this, Mr. Bloom paints a sobering if not, alas, entirely unfamiliar picture. Today’s students, he finds, are generally ”nice” but passionless; above all, they are self-centered. More or less unthinkingly committed to an ethic of cultural relativism, they are intellectually and morally unambitious, ”spiritually detumescent.” The fundamental questions that have traditionally motivated a liberal education -What is the good? What is truth? What should I do? -strike them as hopelessly naive and beside the point.

Mr. Bloom makes it quite clear that he considers ”the good old Great Books approach” the ”only serious solution” to the crisis in education; and, as he stresses again and again, liberal education consists precisely in ”knowing the alternative answers and thinking about them.” At the same time, Mr. Bloom is skeptical about what he describes as ”the Great Books cult,” enumerating its deficiencies – from its tendency to encourage a kind of autodidactic amateurism to its penchant for ”a certain coarse evangelistic tone” – with greater penetration than many opponents of the approach.

In fact, one of the chief things to appreciate about ”The Closing of the American Mind” is that its dominant stance is interrogative, not prescriptive. Everything problematic that the term modernity implies, all the doubts about the meaning of tradition, the legitimacy of inherited values, the point of preserving high culture – all this Mr. Bloom is perfectly cognizant of. He, too, has read Nietzsche, and his discussion betrays none of the naivete that many conservative treatments of such matters display. Nor does he imply that the answer to the problem of liberal education is to return to some simpler, less encumbered past. About changes in the American family, for example, he notes that he is ”not arguing here that the old family arrangements were good or that we should or could go back to them. I am only insisting that we not cloud our vision to such an extent that we believe that there are viable substitutes for them just because we want or need them.”

Of course, this book will find many enemies – mostly, I suspect, because of its avowedly traditional vision of what it means to be an educated person. And no doubt many will object that this portrait of liberal education is in many ways a caricature or an exaggeration. Certainly, there are exceptions to the rule of mediocrity and ideological posing that Mr. Bloom anatomizes in these pages; but the question remains whether his general assessment is not in fact accurate.

Indeed, it is difficult not to conclude that ”The Closing of the American Mind” is that rarest of documents, a genuinely profound book, born of a long and patient meditation on questions that may be said to determine who we are, both as individuals and as a society. And while Mr. Bloom’s indictment is severe, it is by no means despairing. As he notes in his concluding remarks, despite the fragmentation and disorder in the university today, ”The questions are all there. They only need to be addressed continuously and seriously for liberal learning to exist; for it does not consist so much in answers as in the permanent dialogue.” With ”The Closing of the American Mind,” Mr. Bloom takes his place as an articulate participant in that dialogue.

Book Review from The New York Times, by Roger Kimball