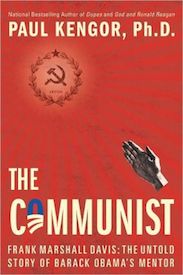 Did Americans really know Barack Obama when they voted to make him their 44th president? Many of them had never heard of the man until he came forward to challenge Hillary Rodham Clinton in the 2008 Democratic presidential primary.

After the market dive in the midst of the fall campaign, a majority of voters chose the freshman U.S. senator over his colleague Sen. John McCain, Arizona Republican and a war hero.

Some polls have indicated many of the president’s fellow countrymen (including some 2008 Obama voters) have nagging doubts about the current White House occupant. There is just something a little more exotic about him than one would expect of a president of the United States.

Paul Kengor has tracked down some history that might help explain what has led to the present-day thinking of that president, who is in a tight race to keep his job at 1600 Pennsylvania Ave.

In “The Communist: Frank Marshall Davis: The Untold Story of Barack Obama’s Mentor,” Mr. Kengor, a political science professor at Grove City College, identifies Davis, who died in 1987, as Mr. Obama’s mentor from boyhood well into the future president’s teens.

It took considerable digging to unearth the life story of a man who, likely far more than any other single individual, molded President Obama’s worldview — culturally, politically and about life in general.

In Mr. Obama’s autobiographical “Dreams From My Father,” Davis is identified only as a poet named “Frank.” No last name is given, nor is he mentioned in that book’s index.

Mr. Kengor produces evidence that Davis was a card-carrying member of the Communist Party USA. (His actual membership card number is cited.)

Almost 75 percent of the book goes into every available detail of Davis‘ long history of adherence to the objectives of the Soviet Union. Clearly, he was much more than a poet. Interestingly, since the connection was exposed by analysts including Trevor Loudon and Cliff Kincaid and cited by intelligence expert Herbert Romerstein, the audio version of Mr. Obama’s autobiography has eliminated all references to “Frank.”

Davis wrote for and edited communist controlled newspapers for years, first the Chicago Star, then the Honolulu Record. He faithfully toed the Communist Party line. His paper even secured an exclusive interview with then- Soviet Foreign Minister Vyacheslav Molotov, indicating “a direct line to the Soviet Central Committee.”

To cite other examples, Davis accused Democratic President Truman and the postwar Marshall Plan of having “imperialist” aims and charged that Truman sought to “rule Russia,” declared that the people of Eastern Europe who resisted Soviet takeover of their nations were “fascists” and argued that a tax plan passed by the Republican 80th Congress (which helped lead to America’s postwar prosperity) amounted to “tax cuts for the rich.” (Sound familiar?)

Much of “The Communist” reads like a history of Cold War propaganda in the United States. Readers of recent generations will be fascinated. Older students of Cold War investigations of infiltration of our institutions will want to keep the book as an updated research document on information that has emerged more recently regarding that era.

The author shines some light on early communist support for Planned Parenthood, whose founder, Margaret Sanger addressed a Ku Klux Klan rally in 1926. Planned Parenthood, which has received taxpayer dollars since 1970, provides abortion services and is widely criticized by pro-life groups.

We also learn of communist and pro-communist influences in the lives of two of today’s closest Obama confidants. Valerie Jarrett’s father-in-law and maternal grandfather worked with Davis in communist front activities. David Axelrod was mentored by a man who was “nurtured in the USSR under Stalin’s collectivization” and then refused to answer a congressional committee’s questions as to his Communist Party membership.

As we get down to the actual role “Frank” played in the life and outlook of the future most powerful man on the planet, it is established that the two met frequently not for just a few years, but a full decade; the influence was “lasting.” During his years at Occidental College, Mr. Obama spoke of “when the revolution comes” and described any doubts about the imminence of a Marxist revolution as “crazy.

Finally, Mr. Kengor makes the point that his goal “is not to declare President Obama is a communist or a card-carrying member of CPUSA.” Nonetheless, he wonders “if Barack Obama had once been a communist, which is certainly not unusual for someone of his age, then what and where and why and how did he change and why have we not heard about it?”

Regarding the national optimism as President Reagan’s economic policies were in full force, Mr. Obama in the 1980s wanted to change the mood that Reagan had changed. “To what?” the author asks. Surely not something akin to America’s mood in 2012?

Book Review from The Washington Times, by Wes Vernon