The Compleated Autobiography of Benjamin Franklin 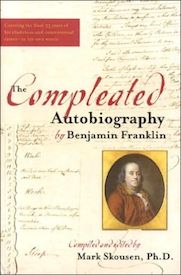 Benjamin Franklin (1706-1790) was the most famous American of his age — a world-renowned inventor, essayist, philosopher, diplomat, wit, and the only Founding Father to sign the Declaration of Independence, the Treaty of Paris, and the United States Constitution. His Autobiography, though considered the most popular and influential memoir ever written, ends abruptly in 1757, when he was just 51 years old; another 33 years of his life were still to be recorded when he died, including the most eventful years of his illustrious political career. Now, in honor of the 300th anniversary of Franklin’s birth, Mark Skousen has accomplished what the old philosopher could not. Drawing from Franklin’s own papers, correspondence, and a detailed outline Franklin left behind, Skousen has completed the Autobiography — using Franklin’s own words.

Although the Compleated Autobiography is primarily an account of the political Franklin — his life in London as a colonial agent, his role in the Declaration of Independence, his service as America’s first ambassador to France, and his part in creating a new constitution and a new nation— it reveals a private Franklin expressing his wit, wisdom, and worries on wide-ranging themes of family life and religion, friends and enemies, science and philosophy, health and wealth, and politics and economics. It also retains sophistication, humor, and sense of irony that made the original autobiography a classic— and is destined to create a renewed appreciation of Benjamin Franklin as an original thinker and primary figure in the founding of the United States of America.

The “remarkable discovery” that led to this book

In his introduction, Skousen— a lifelong student of Franklin, and a direct descendant—reveals the “remarkable discovery” that made The Compleated Autobiography of Benjamin Franklin possible:

“While perusing [Franklin’s] papers, I made a remarkable discovery: Franklin had virtually written, albeit in bits and pieces, the remainder of his illustrious life through his journals, essays, and letters to his relatives and friends about family life, politics, science, business, literature, and philosophy. As Carl van Doren, Franklin’s premier biographer, explains, ‘For Franklin, the most widely read of autobiographers, was an autobiographer by instinct and habitual practice.’ There was much to work with. Franklin kept a series of diaries. In letters to his close friends and relatives, he gave charming details of his domestic existence, and related many political maneuvers behind the scenes in London and Paris. In one instance, Franklin wrote a three-page letter to Lord Kames summarizing his two years in America, 1762-64. Not all his letters survive, but those that do paint a full picture of the man and his colorful career and character.

“In addition to these letters, Franklin composed three important chapters he intended to include, in whole or in part, in his Autobiography: First, his Tract Relative to the Affair of Hutchinson’s Letters; second, an Account of the Negotiations in London for Effecting a Reconciliation between Great Britain and the American Colonies; and third, Journal of the Negotiation for Peace with Great Britain from March 21st to July 1st, 1782. Franklin showed the second of these papers to Thomas Jefferson in March 1790 as a ‘sample’ of the ‘history of his own life’ he was preparing. All three were written after he wrote the first part of the Autobiography (in 1771), and he no doubt was planning to incorporate them when he reached the years in which these events took place. I have included all three monographs in condensed form in the Compleated Autobiography.”

The resulting work supplies a complete first-person narrative of every major phase and event in Franklin’s glorious political career, including:

Appendixes include Franklin’s Last Will and Testament, and the original outline by Franklin on which The Compleated Autobiography is largely based.

Among the many revelations in The Compleated Autobiography of Benjamin Franklin: