Conservative Book Club » Biographies & Memoirs » Courage and Consequence: My Life as a Conservative in the Fight

Courage and Consequence: My Life as a Conservative in the Fight 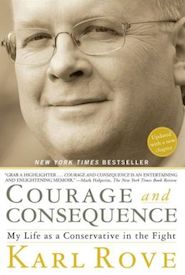 It’s been said that Washington is the only place in the world where you can fail upwards. Doesn’t matter how many times you lose or screw up, there’s always another perch to be filled, another dollar to be made (see: Shrum, Robert, career of). One corollary to this rule: Washington is a place where success can be dangerous. Victory makes you a target; the larger the victory, the bigger the target. Win a lot? Before long, your opponents pull out the knives, unleash the hounds, and go hunting for some political scalp.

Karl Rove knows. He’s been pranking, lampooning, debating, campaigning against, and defeating liberals since 1969, when he joined the College Republicans at the University of Utah. The Democrats have never forgiven him for it. Over forty-plus years he has been the College Republicans’ executive director, an aide at the Republican National Committee, the president of his own political consultancy, the architect of two winning presidential campaigns, one of the most powerful White House advisers in history, and (most recently) a prominent commentator and author. At every turn, his opponents have singled him out for criticism and invective. They’ve accused him of scandals and dirty tricks. They’ve targeted him for prosecution. Yet somehow Rove keeps chugging along.

The campaign against Karl Rove never stops. He’s been blamed for
sordid and underhanded dealings in various Texas campaigns, in the 2000 South Carolina Republican primary, in Senator Max Cleland’s failed reelection bid in 2002, in the “outing” of CIA agent Valerie Plame in 2003, in the Swift Boat Veterans for Truth in 2004, in the indictment of former Alabama governor and convicted felon Don Siegelman in 2005, in the firing of seven U.S. attorneys in 2006, and in (fill in the blank). Rove left the White House in 2007. During the 2008 presidential campaign, Barack Obama liked to say he’d end “the Karl Rove era of politics.” Recently, as Rove has traveled the country promoting this well-written and gripping memoir, far-left groups have interrupted his speeches with jeers and heckles and even an attempted “citizen’s arrest.”

“I have become an adjective,” Rove muses. And indeed he has. For Democrats and the mainstream media, “Rovian” is shorthand for the worst sort of political skullduggery. In this view, a Rovian deploys the “politics of fear.” He divides the public, tars Democrats as weak, mobilizes his base, and wins slim, partisan victories. He’s a fundamentalist, a cynic, a Manichean, a bigot, a nihilist. His “modus operandi,” the story goes, is “to ‘destroy the opponent at all costs,’ generally through an onslaught of vicious attacks, most of them subterranean and all of them unfair.” In the liberal imagination, Karl Rove is not a person. He’s a demon.

This cartoon version of reality would be laughable if it didn’t have real-world consequences for Rove and his family. During the Bush years the Democrats’ fantasies drove them to launch investigation after investigation into Rove, and these investigations wasted his time, sapped his money and energy, invaded his privacy, and hurt his wife and son. However, despite their considerable exertions, Democrats never have been able to tie Rove to any of the horrible things they’ve accused him of doing: He didn’t publish or distribute the racist flyers against John McCain in 2000, and he “did not conceive, create, craft, prepare, or have anything to do with the Chambliss television ad” that helped defeat Cleland.

Richard Armitage was the original source of the Plame leak. Over the course of three years, Rove made five Plame-related appearances before a grand jury, but he wasn’t indicted. The Swift Boat vets were not connected to the Bush campaign. The Siegelman story is baloney ginned up by a single source. As for the now-forgotten U.S. attorneys “scandal”: During a second-term performance review, Rove forwarded some complaints to the Justice Department about a few federal prosecutors. That’s small fry. It’s also completely irrelevant, since the Constitution grants the president authority to fire any U.S. attorney for any reason whatsoever.

Democrats and the media owe Rove one giant apology. But an apology is not forthcoming, for the simple reason that the liberal caricature of Rove is impervious to facts. Why does it have such staying power? My theory is that the cartoon is the only way Democrats can explain Rove’s success. Since liberals believe themselves to be intellectually and morally superior to conservatives, they naturally become confused whenever the voters opt for the stupid party. Sometimes liberals explain conservative victories by saying the voters don’t know their true interests, but most of the time the explanation is that the Republicans win because they play dirty.

Which is where Rove comes in. Between 2000 and 2005, the consultant and his most famous client flummoxed the opposition at every turn. First Rove and George W. Bush eked out an Electoral College victory, even though the incumbent president of the other party was popular, the budget was in surplus, and the country was enjoying apparent peace and prosperity. Then the newly elected president, with Rove at his side, embarked on an extraordinarily successful first term. The president had bipartisan support for policies ranging from tax cuts to the Patriot Act to the wars in Afghanistan and Iraq to No Child Left Behind to Medicare reform.

The president was relatively popular for most of his first term, at times extremely so. He was the first new president since Franklin Roosevelt to expand his congressional majority in the subsequent two elections. He won a clear victory over Sen. John Kerry of Massachusetts by portraying the Democratic nominee as equivocal and weak on defense in a time of war. By Bush’s second inauguration, commentators were writing the epitaph of the Democratic party and the president was about to embark on ambitious plans to introduce personal retirement accounts into Social Security, modernize immigration law, and overhaul tax policy.

How did Bush and Rove achieve these victories? Not by sliming the opposition, ignoring dissenting views, and preaching to the choir. Yes, Bush, Rove, and the Republicans attacked Democrats when they thought it was justified. “To be successful,” Rove writes, “an attack must be perceived as both fair and relevant, backed with credible evidence, and launched at the right time.” But attacks are only part of the approach.

There are seven other “hallmarks of a ‘Rovian’ campaign.” Aspiring Roves, take note: Your candidate must have a big idea. He must talk about his ideas in a persistent and persuasive way. Historical data must drive the political strategy. The campaign must use computer modeling to identify and turn out supporters. You must set goals and check the campaign’s performance against those goals. The campaign must invest in volunteer-friendly technologies like text messaging. Finally, the campaign must vacuum up “knowledge and resources for the candidate”—i.e., nerds, volunteers, and of course, money.

That is how George W. Bush won in 2000 and grew his vote in 2004, and it is how Barack Obama won in 2008. Even so, Democrats attributed Bush’s successes to the Rove hobgoblin that haunted their imaginations. They grew determined to respond in kind. And the Democrats’ transformation—along with Hurricane Katrina, congressional corruption, a flawed strategy in Iraq, and the bursting of the housing bubble—made Bush’s second term terrible.

The space between Democratic rhetoric and Democratic behavior was huge. Even as they accused Bush of partisanship, the Democrats refused to negotiate on Social Security, blocked Republican judicial appointments, and blew up a tentative immigration compromise in 2007. Even as they said Bush politicized national security, the Democrats voted to cut off funding for the war in Iraq, opposed the surge, and demagogued in public the surveillance and interrogation techniques they had supported in confidence.

Even as they zinged Rove for gutter politics, the Democrats called Bush an illegitimate president, a dictator, a liar and buffoon who was guilty of war crimes. They acted as grand inquisitors, launching inquiries that amounted to the criminalization of policy differences. When the 2008 election rolled around, they smeared John McCain with the lie that he wanted the war in Iraq to last a hundred years, and then unleashed a character assault on Sarah Palin unlike any other in recent memory. Seized by hatred and fury, the Democrats became the very object of their loathing.

“Rovian”? They should look in the mirror.

Book Review from The Weekly Standard, by Matthew Continetti

Tags: Courage and Consequence: My Life as a Conservative in the Fight, Karl Rove