Dead Men Risen: An Epic Story of War and Heroism in Afghanistan 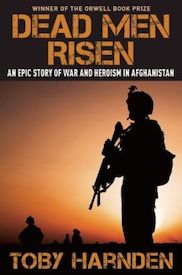 Dead Men Risen, winner of the prestigious Orwell Prize for Books, is the epic story of a beleaguered British battle group fighting desperately to prevent the Taliban from seizing Afghanistan’s Helmand province just as the U.S. Marines arrive to take over.

Bestselling author Toby Harnden describes how men from the coal mining valleys and slate quarry villages of Wales found themselves in the most intense combat faced by British troops for a generation. Underequipped and overstretched, the fighting prowess of the Welsh Guards in the killing fields of Sangin and Nawa awed the U.S. Marines. NATO commander General Stanley McChrystal, who was awaiting a response to his urgent request to President Barack Obama for more troops, hailed their “burn-in-your-gut passion.”

Harnden was on the ground with the Welsh Guards in Helmand in 2009. He gained access to a trove of secret military documents and conducted nearly three hundred interviews in Afghanistan, England, Wales, and the United States to produce this timeless and profound account of men at war.

Commanding the Welsh Guards was Lieutenant Colonel Rupert Thorneloe, a passionate believer in the justness of the war who was dismayed by the military and political incompetence surrounding it. In chilling detail, Harnden reveals how and why Thorneloe—the first British battalion commander to die in action since the 1982 Falklands War—was killed by an IED during Operation Panther’s Claw. By the time the fighting was over, almost no rank had been spared.

From the searing heat of the poppy fields and the mud compounds of Helmand to the dreaded knock on the door back home, the reader is transported there. Harnden weaves the experiences of the soldiers, their historical forbears and the flawed NATO strategy into a masterly narrative. No other book about modern conflict succeeds on so many levels. Dead Men Risen is essential for anyone who wants to understand the reality of the Afghan war for the U.S and its allies.