December 1941: 31 Days that Changed America and Saved the World 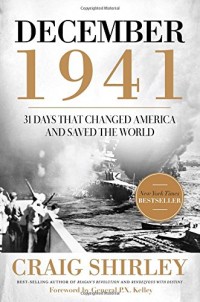 In the days before the attack on Pearl Harbor, eyes in America were focused on the war in Europe or distracted by the elevated mood sweeping the country in the final days of the Great Depression. But when planes dropped out of a clear blue sky and bombed the American naval base and aerial targets in Hawaii, all of that changed. December 1941 takes readers into the moment-by-moment ordeal of a nation waking to war.

Best-selling author Craig Shirley celebrates the American spirit while reconstructing the events that called it to shine with rare and piercing light. By turns nostalgic and critical, he puts readers on the ground in the stir and the thick of the action. Relying on daily news reports from around the country and recently declassified government papers, Shirley sheds light on the crucial diplomatic exchanges leading up to the attack, the policies on internment of Japanese living in the U.S. after the assault, and the near-total overhaul of the U.S. economy for war.

Shirley paints a compelling portrait of pre-war American culture: the fashion, the celebrities, the pastimes. And his portrait of America at war is just as vivid: heroism, self-sacrifice, mass military enlistments, national unity and resolve, and the prodigious talents of Hollywood and Tin Pan Alley aimed at the Axis Powers, as well as the more troubling price-controls and rationing, federal economic takeover, and censorship.

December 1941 features surprising revelations, amusing anecdotes, and heart-wrenching stories, and also explores the unique religious and spiritual dimension of a culture under assault on the eve of Christmas. Before the attack on Pearl Harbor, the closest thing to war for the Americans was uncoordinated, mediocre war games in South Carolina. Less than thirty days later, by the end of December 1941, the nation was involved in a pitched battle for the preservation of its very way of life, a battle that would forever change the nation and the world.