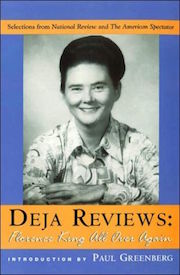 When Florence King writes, even liberals can’t help laughing — though most of her barbs are aimed directly at them. The Washington Post calls her “one of the few contemporary American essayists of sufficient pungency and wit as to be almost always worth reading” — and even the New York Times concedes that “she can write a mean tour de force.” Conservatives love her, of course, even when she holds their feet to the fire. Now, you can enjoy some of her very finest and funniest writing in “Deja Reviews: Florence King All Over Again” — a handsome 360-page hardcover collection of each and every one of the glorious essays and unrivalled book reviews Miss King penned for National Review and The American Spectator up until her (now happily revoked!) retirement in 2002.

Great writing is timeless, and so it is with “Deja Reviews.” No matter how “old” her review, no matter how dated the topic of an essay, you’ll find that each piece is as fresh as a slap in the face, as biting as an angry asp, and as funny as all heck! Included here are such classic, hilarious essays as “I’d Rather Smoke Than Kiss,” “A Wasp Looks at Lizzie Borden” and “South Mouth: Why Liberals Hate Dixie” — plus 59 book reviews, the milieu where Miss King’s talents are on their most glorious display. Indeed, it would be hard to top this opening paragraph of one such review:

Back in the Cold War, whenever I had to review an unreadable book, I always comforted myself with the thought, ‘Maybe the Russians will drop the Bomb and I won’t have to finish reading this.’ Those were the days. This time, stuck with A Pilgrim’s Way: The Personal Story of the Episcopal Bishop Charged with Heresy for Ordaining a Gay Man Who Was in a Committed Relationship, by the Rt. Rev. Walter C. Righter, author of the longest subtitle in publishing history, all I could hope for was an asteroid.

As conservative commentator writes in his introduction, “The lady knows nothing of mediocrity. Which may be why any collection of her writings goes off like a fireworks display. Any attempt at transition between the blasts would be ludicrous, like playing a waltz between artillery barrages.”