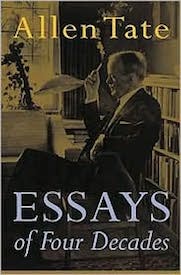 Books come and go, most of them. A few remain, because they speak to each succeeding generation. How many books written in the late 60s are still read today? Allen Tate’s “Essays of Four Decades” is one of the few — and probably one of the most important. A Southern Agrarian and uniquely gifted man of letters, Louise Cowan writes in her introduction to this edition of the book that Tate “raised issues that still need to be confronted in our society.”

Cowan continues: “[Tate’s] concern … was with one theme: the ‘deep illness of the modern mind.” He wrote “The mind is the dark center from which one may see coming the darkness gathering outside us.” This darkness stems from the West’s retreat from its own fundamental principles. “A society can hardly revert to a healthy paganism”, he once wrote, “after it has had the Christian revelation.” Following a reflection of the brilliant synthesis of Medieval Christendom, what was ahead for Western culture but abstraction and fragmentation? Having once known the higher reality, how can a culture be vital and productive with a lesser view?…

“One discerns in all his work … that Tate is himself that marginal figure, standing between two epochs, lamenting the loss of an age of faith and dreading the oncoming darkness…. It was given to Tate to visualize the end of modernity.”

Allen Tate guides us into the core of Western thought. In this masterpiece by one of the century’s most acclaimed poets and literary critics, Allen Tate touches on the broad sweep of fiction, poetry, poets, imagination, literature, and culture of the pre- and post-Christian West in 48 spacious essays, among them:

Vigorously written, this interpretation of the confluence of pagan and Christian ideas in Western language and action brings us to the heart of American culture at the end of the 20th century. Essays should be read by all who believe that traditional ethics are superior to barbarism. If you haven’t yet immersed yourself in this classic, prepare for one of the mind-opening experiences of your life.

“Allen Tate’s eminence … consists in his uncommon combination of excellences…. [He] is a good poet and a good literary critic who is distinguished for the sagacity of his social judgment and the consistency with which he has maintained the least popular of political attitudes — that of sage.”–T. S. Eliot