Everyone Has The Right to My Opinion 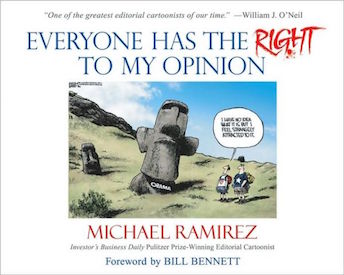 If the editorial cartoon stands as the most succinct and entertaining of political art forms, then Michael Ramirez stands as its master artist. Since 1983 — first at the Los Angeles Times, and now at Investor’s Business Daily — he has taken the art of editorial cartooning to heights of humor and depths of insight never seen before, winning two Pulitzers along the way. Now, in Everyone Has The Right to My Opinion, Ramirez personally selects over 200 of his award-winning cartoons, introducing them in an essay that reveals the serious intent behind the humor. From Election 2008 and global warming to media bias and the war in Iraq, Everyone Has The Right To My Opinion delivers a combination of hard-hitting commentary, gut- busting humor and intricate artwork.

“The quickest way to end all debate with liberals is to pull out a cartoon by Michael Ramirez.” — SEAN HANNITY

“No other editorial cartoonist today can match the majesty and wit of Michael Ramirez’s cartoons.” — ANN COULTER

“Ramirez lances the Left with the best weapon of all. Humor.” — RUSH LIMBAUGH

“If editorial cartooning were baseball, Michael Ramirez would be Babe Ruth.” — MIKE HUCKABEE

“Ramirez’s pen is a weapon of mass destruction: lethal, explosive, and always on target. From Hollywood to

Washington to Iran, no blowhard is safe. No sacred cow is immune. A picture may be worth 1,000 words. This collection of Ramirez’s finest work: Priceless.” — MICHELLE MALKIN

Tags: Everyone Has The Right to My Opinion, Michael Ramirez