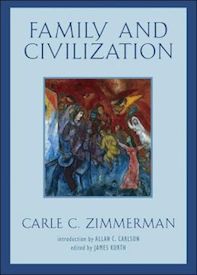 “The struggle over the modern family and its present rapid trend toward a climactic breakup will be one of the most interesting and decisive ones in all history. So much is at stake.” So writes Harvard sociologist Carle Zimmerman in his 1947 classic “Family and Civilization.” Sixty-one years later, residents of Western democracies do indeed find themselves in the midst of a climactic breakup of family life — and few books offer more much-needed insight into our current social crisis than Zimmerman’s remarkably prescient work.

In this unjustly forgotten work, Zimmerman demonstrates the close and causal connections between the rise and fall of different types of families and the rise and fall of civilizations, particularly ancient Greece and Rome, medieval and modern Europe, and the United States. Zimmerman traces the evolution of family structure from tribes and clans to extended and large nuclear families to the small nuclear families and broken families of today. And he shows the consequences of each structure for the bearing and rearing of children; for religion, law, and everyday life; and for the fate of civilization itself.

Zimmerman also predicted many of today’s cultural and social controversies and trends — including youth violence and depression, abortion and homosexuality, the demographic collapse of Europe and of the West more generally, and the displacement of peoples. In permissive modern attitudes, Zimmerman recognizes the emergence of “the idea of atomistic man as the only unit in society” — an idea whose cultural prominence can only mean that “the Western world has entered a period of demoralization comparable to the periods when both Greece and Rome turned from growth to decay.” Indeed, as he surveys life in modern America, Zimmerman catalogues various forms of action and thought identical with those during the high period of atomism in Greece and Rome — including:

Scholarly yet readable, Carle Zimmerman’s “Family and Civilization” helps readers understand why the recent changes in family life constitute a civilization-threatening crisis, and shows how many of our most threatening social problems originate in family disintegration. The accompanying essays by modern commentators show how his argument has retained relevance today, especially in the wake of the West’s demographic collapse.

“Dr. Zimmerman disdained his academic colleagues, who in his view denied history because the facts led them to conclusions they didn’t want to accept. James Kurth, the distinguished Swarthmore political scientist who edited the new version of Family and Civilization, says that the book’s publication made one of the nation’s premiere sociologists a politically incorrect nonperson overnight. Why should we read Dr. Zimmerman today? For one thing, the future isn’t fated. We might learn from history and make choices that avert the calamities that overtook Greece and Rome.” — ROD DREHER, Dallas Morning News