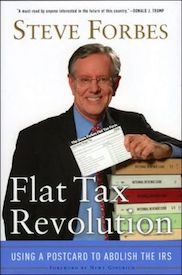 America’s federal income tax code is a horror of incomprehensible complexity, corruption, and opportunity-killing provisions. Meanwhile, our competitive position in the world economy is being threatened and undermined by a worldwide wave of tax simplification. Nations — such as Russia, Hong Kong, Romania, Lithuania, and Slovakia — who are instituting simple, low-rate Flat Tax systems are providing enormous incentives for economic growth, while America’s tax code continues to grow into an out-of-control and burdensome beast. Now, in “Flat Tax Revolution: Using a Postcard to Abolish the IRS,” Steve Forbes proposes a grassroots revolution to overhaul the current 9 million-word tax code to unshackle the entrepreneurial spirit and creativity of American workers.

In Forbes’s carefully thought out plan, there would be one rate — 17% — after generous exemptions for adults and children. Under the Flat Tax, for example, a family of four would pay no federal income tax on its first $43,765 of income and would pay only 17 cents on every dollar it earned above that level. There would be no tax on Social Security benefits. No tax on personal savings. No capital gains taxes. And small businesses and family farms wouldn’t have to worry about being wiped out by the death tax — no taxation without respiration. Best of all, there would be no more time-consuming complications — you could literally fill out your tax form on a single page or even a postcard!

Forbes draws on a quarter century of academic research, and combines that with practical reporting about countries across the planet that have improved their economies by moving to a Flat Tax system. He shows how the Flat Tax that will translate into a tax cut for every American while also adding seven to ten percent to the American economy through faster economic growth. He further shows how this extra economic growth would help finance the transition to a personal social security savings account system, help balance the federal budget, increase philanthropic giving to charities, increase business investment in new machines and new technology so American workers could compete successfully in the world market and, finally, this growth would increase your take home pay, your families retirement savings, and your ability to achieve your dreams of a better future.

“Steve Forbes has done a great service for all Americans. In one slim volume he has packed more information about the advantages of a Flat Tax and the disadvantages of the current tax system than I have ever seen in one place. . . . The Forbes Flat Tax is more than a big idea. It is the right idea and it is a doable idea.” — NEWT GINGRICH

“The American Revolution was all about taxes. Now, says my friend Steve Forbes, it’s time for another revolution, a flat-tax revolution to cut our taxes and eliminate the IRS. I love this book and its call to action – and so will you.” — SEAN HANNITY

“With this book, Steve Forbes has once again proven himself to be an indispensable voice in the debate over America’s economic future. With big government Republicans and Democrats controlling Washington, Mr. Forbes’s visionary reforms are needed now more than ever.” — JOE SCARBOROUGH, host of MSNBC’s Scarborough Country

“When it comes to forecasting what we need to do to keep America’s economy growing, Steve Forbes is the answer man. His great new book Flat Tax Revolution shows how we can make every American’s life more productive, less burdened by bureaucracy, and better off financially. Who can argue with that? If you buy his book, you’ll know effectively how to argue for it.” — JACK KEMP

“Steve Forbes challenging the federal income-tax code is like David challenging Goliath. Taxpayers will be happy to learn that in Flat Tax Revolution Forbes has let loose the well-aimed stone that can bring the monster down.” — TERENCE P. JEFFREY, editor, Human Events

“Steve Forbes knows what he’s talking about, and he’s definitely on to something important. This book isn’t about sound bites. This book is substantial, insightful, and in my opinion, a must-read by anyone interested in the future of this country.” — DONALD J. TRUMP

“Long before it was cool to discuss tax reform, Steve was on the stump trying to do something about it. He’s helped focus a nation on the need for change, and when it comes … and it will come . . . he will be the one largely responsible for it.” — NEIL CAVUTO, FOX News

“On the supply side of economic freedom, Steve Forbes’s Flat Tax Revolution shows how to maximize America’s economic growth and keep us the world economic leader.” — LAWRENCE KUDLOW, host of CNBC’s “Kudlow and Company”