Free to Choose: A Personal Statement 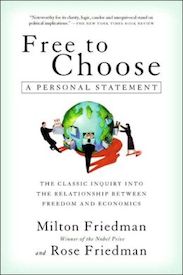 Steamroller government is the bane of twentieth century life. It is the trademark of our time. Expanding budgets, unfettered taxation, galloping inflation, burgeoning bureaucracy, tireless assaults upon individualism and productivity are the tragic earmarks of our painfully collectivized world. Free to Choose tackles this Leviathan and dispels much of the ignorance, the many cliches, and the persistent myths which envelop the welfare state. Author of a growing shelf of free market books and monetary treatises, Mil ton Friedman brings to his latest task the rarefied prestige of the Nobel Prize, a formidable array of mental tools and academic skills. Mrs. Friedman is a scholar in her own right.

Essentially, the Friedmans tell us that the market economy is indispensable to a free society. It is the free market which generates maximum production and provides the means for every other liberty. As an aid in convincing recalcitrant readers, the authors invoke the “invisible hand” of the redoubtable Adam Smith, whose Wealth of Nations appeared the same year as the Declaration of Independence (“a curious coincidence”).

The “miracle” of American productivity, the authors point out, stems from the market—free men engaged in voluntary exchanges. Private initiative unrestrained by the bureaucratic tyranny of economic controls produced the wealthiest country ever. Critical to this paradigm is the role of prices as transmitters of information—a peculiarly “Austrian” notion. It was Adam Smith’s great “flash of genius,” however, that prices (emerging as they do from voluntary transactions) coordinate the myriad activities of millions of unsuspecting actors blissfully unaware that they are part of any general system or plan.

It is this apparent “planlessness,” this “anarchy of production” of free market capitalism that interventionists and collectivists decry so vacuously, ignorant that the underlying harmony is bolstered and guided by the phenomenon of price, which in turn is the reliable reflection of consumer spending. This issue is not, and never has been, “planning” versus “not planning” but, rather, who shall do the planning? Shall production be dictated by the socialist board of central planning; or shall producers be guided by the millions of customers casting their “ballots,” expressing their wants in the daily plebiscite of the market? Only the latter is compatible with a society of free people.

There is an excellent chapter favoring free trade, establishing the point that “controls on foreign trade extend to domestic trade.” Social Security and other “welfare” measures are shown to be hollow promises. Government schooling is severely critiqued, as are labor unions, and the various regulatory agencies allegedly designed to protect the consumer.

Only when they come to the chapters on inflation and the depression do the Friedmans abandon their free market scenario. Here the authors are all for the Federal Reserve System (a notorious instrument of governmental hegemony over the market), government sponsorship of the money supply, and a yearly rate of officially prescribed doses of inflation. It is true that the Friedmans correctly diagnose the economic culpability of government. Moreover, they easily pierce the standard fallacies that it is the greedy businessman, the unions, or rapacious Arab sheiks that generate inflation. But the “cure” which is served up is dubious indeed. It is to control inflation by carefully calibrated doses of inflation! Government would legally expand the money supply at a fixed annual rate—as if the political process could be trusted to achieve an economic end!

Furthermore, the authors are convinced that the Great Depression resulted from a deflation, a too-sharp reduction in the amount of money in circulation. Certainly they err. An elementary application of Say’s Law would enable us to understand that a contraction in the money supply followed by a corresponding drop in wages and prices need present no insurmountable difficulties. Except for the initial period of readjustment inescapable during any period of deflation, no serious curtailment of goods and services need result. However, if the government attempts to artificially enforce yesterday’s prices with today’s monetary quantity, tragic dislocations and bottlenecks are inevitable. That was the legacy of the Great Depression: a futile attempt to prop up inflated prices with a deflated currency.

The Friedmans believe that we need a governmentally sponsored central bank of issue. Misesians would argue that the existence of such a bank has been the problem all along. What is really needed is a free market money divorced from the arbitrary acts of power brokers and political collaborators. At any rate, to couple the “free market” with a governmental monetary bureaucracy amounts to a regrettable contradiction in terms.

Book Review from The Freeman, by William L. Baker