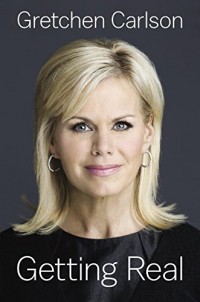 As the host of The Real Story with Gretchen Carlson on Fox News and as a former Miss America, Gretchen Carlson knows the pressures and joys of being a successful career woman today. Through her incredible life, she has grown passionate about having a real conversation with modern women in our journey to have it all – career, family, health, faith, and sanity.

In her new book, Getting Real, available on June 16th 2015, Gretchen Carlson combines a creative telling of her life story with a mix of advice and support for ambitious women and girls everywhere. “You can be anything you want to be,” as her mother would tell her growing up. “God gave you talents and He expects you to make the most of them.”

Her journey began in Anoka, Minnesota, a small town settled by Scandinavian immigrants best known for being the Halloween Capital of the World and where current Congresswoman Michelle Bachmann was her babysitter. Her gift with the violin brought her onto some of the largest stages in the country. Many of her childhood friends and fellow prodigies went onto become world-famous musicians.

Her talents extended into other areas as well. She played the piano, was valedictorian of her high school graduating class, and went on to Stanford University. It was this combination of interests and talents that convinced young Gretchen Carlson, about to enter her senior year at Stanford, that she had what it took to become Miss America.

The experts told her that no one wins a crown on their first attempt, but as with most things in her life, if someone told her it couldn’t be done, she turned her energies with laser-focus on accomplishing that very thing. Credited largely to her masterful violin performance in the talent portion of the contest, she did in fact clinch the title of Miss America in 1989. Her victory was but the in a long, successful career punctuated with trials.

Despite being crowned Miss America, she faced belligerent reporters determined to expose her as a dumb, blonde “bimbo.”

Despite her having a successful reign as Miss America, she struggled to gain recognition as a reporter due to claims that she only landed good stories because of her crown.

Despite her beginning to find success in journalism, she was fired from a job, spent nearly a year unemployed.

Despite winning the prestigious American Women in Radio and Television “Best Series” award and two Emmy awards for her work at CBS News, she faced sexual harassment and even assault on the job.

Despite her success at Fox News, she still faces cyber-bullying about her weight, her intelligence, and her beliefs.

And despite all of her success in her career personal life, her and her husband struggled to start a family, and then faced many health challenges with both of their miracle children.

These powerful experiences inspired Gretchen to fill her book with encouragement for other women who might be facing similar challenges.

Most readers will find her style as vivacious as her violin playing;however, some who might not be as familiar with her on-screen personality might find her overly eager. Regardless of how you interpret her tone, this endeavor furthers her mission to bring real talk from the television screen to your e-reader screen.

If you’ve been a fan of Gretchen for years, or if she’s just made it onto your radar, this book will leave you feeling like a childhood friend of hers. And, most importantly, you’ll also come away with a few nuggets of real inspiration.

Original CBC review by Jacqueline Isaacs. Jacqueline Isaacs oversees marketing for a free-market non-profit. She holds an MBA from Johns Hopkins University, and she blogs at ValuesAndCapitalism.com.