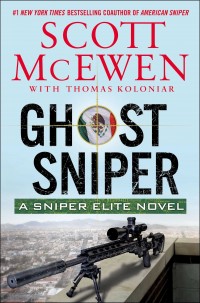 Scott McEwen and Thomas Koloniar have delivered one of the best page-turners of the year with Ghost Sniper: A Sniper Elite Novel. There have been many great military thrillers this year but none have had the non-stop action and breakneck speed that Ghost Sniper brings. Ghost Sniper is the 4th book in McEwen’s Sniper Elite series and is easily a standout.

If you have never heard of Scott McEwen you might have heard of the award winning book he co-wrote with former Navy SEAL Chris Kyle: American Sniper. McEwen has continued with books involving snipers and they are definitely his expertise. He has several descriptions of sniper shooting in Ghost Sniper that paints perfect pictures of how a sniper executes his shot and the thought process going on about the shot, making for a heart racing and suspenseful read.

The book can be picked up by anyone and does not require that the previous books be read to understand what is going. However, if you have read the previous Sniper Elite books you will understand the characters and their decisions better as there are callbacks to previous work they have done earlier in the series.

The story begins in Mexico City with Chance Vaught, a new character and former Green Beret, in charge of security for several Americans including the ambassador to Mexico and the director for the Office of National Drug Control Policy. While on a trip to discuss how to fight the drug lords and cartels Vaught’s escort is damaged in a planned attack. All but Vaught and one of his men are killed including the director who is taken down by the rogue sniper.

Vaught is captured by the cartel but is rescued by an undercover Mexican secret service agent, who informs Vaught that he will now be working for the secret service against the cartel. Vaught meets up with former Navy SEAL Daniel Crosswhite and the two split to track down the cartel and the sniper. The story continues with the long fight against the cartels, touching each of the characters story arcs and point of views. This prove to be high string action at its finest.

Previous readers of the series might wonder where the main protagonist Gil Shannon is in the synopsis and, don’t worry, Gil has a large part to play in the novel as usual. However, Gil’s storyline takes an unexpected and shocking twist that I do not want to spoil. All I will say is that his story begins with an assassination in Liechtenstein.

Ghost Sniper can be a number of things at times. It can be funny, steamy, and political, but all of the story is pure action. Ghost Sniper is the most-action packed thriller I’ve read all year and one of the best. It was a hard book to put down and a consistent page turner.

The only complaint I have for McEwen’s book is that characters seem to get into a seemingly impossible to escape from situations and are conveniently saved. However, this does not hurt the story much and, in fact, makes it feel much like a Bond novel at times.

If you are looking for a high-action and intense thriller this summer, Ghost Sniper might just be the best choice.