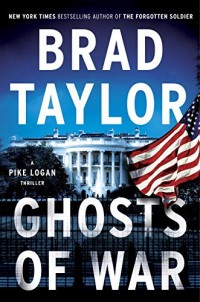 Brad Taylor’s Ghosts of War: A Pike Logan Thriller might just be the best thriller of the year. Ghosts of War is Taylor’s tenth Pike Logan novel and by far one of the standouts. Ghosts of War ups the stakes as Pike and his gang have to prevent a possible World War III from occurring while fighting against Russian mobsters controlled by none other than Vladimir Putin.

The book begins where Taylor’s last book, The Forgotten Soldier, ends- with the death of the Secretary of State. Pike Logan’s Taskforce is then shut down due to the bad press from the Secretary’s death, so Pike and his sidekick Jennifer Cahill return to work with their private archaeological company. However, before Pike can lead a normal life he is contacted by his old friends, Israeli secret service agents Shoshana and Aaron. They enlist Pike and Jennifer to track down an ancient and valuable Torah from a former Nazi stronghold in Poland.

Unfortunately, as Pike and his gang are about to leave with the Torah they are ambushed by a gang of Russian mobsters who steal it. Pike and co. then set off to track down and retake the Torah, but in doing so discover the plan to start World War III, leading to a whole new set of adventures and thrills.

If you have never read a Pike Logan novel before don’t let the beginning overwhelm you. The book does not require you to have read the previous novels to understand what is going on and who everybody is as Taylor does an excellent job at describing and introducing his characters. However, if you have read previous Pike Logan novels then this book is a treat as old favorites Shoshana and Aaron return and the plot is one of Taylor’s best.

Ghosts of War is not just an exciting thriller, it’s a refreshing break from the trend of many recent military thrillers which are almost exclusively based around Islamic terrorism and the Middle East. Ghosts of War instead looks at an old and common thriller enemy in Russia. Even with an old enemy, Taylor changes it up by including real people like Putin, and having the plot revolve around one of Putin’s underlings that tries to actually harm Putin’s operations by planning out World War III.

One of the best things about Ghosts of War is the real life settings and people that Taylor uses as the backdrop to his story. Besides Putin, the other villains of the story are Semion Mogilevich (a mob boss that has graced the FBI’s top ten most wanted list) and the Night Wolves, an extremist group of Russian nationalists that helped in the annexation of Crimea back in 2014. Taylor also toured Eastern Europe and based many of his scenes on places that actually exist, like Bratislava and Ksiaz Castle in Poland where the Torah is kept.

My favorite parts of Ghosts of War have to be the dialogue involving Shoshana and Pike. The scenes these two are in are hilarious and their early scenes where they attempt to steal the Torah are some of the book’s best. Brad Taylor’s Ghosts of War succeeds by breaking the mold of modern military thrillers, having exceptional characters and character development, and having real life villains and a carefully researched backdrop.

All in all Ghosts of War might not just be Brad Taylor’s best novel but the best thriller of the year.