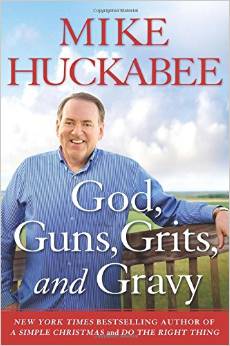 Mike Huckabee’s latest book, “God, Guns, Grits, and Gravy” is an entertaining compendium of the former Arkansas Governor’s take on a number of the salient political issues of the day. And as the title suggests, that point of view emanates from a proud member of “flyover country.”

In Huckabee’s world, America’s political divide isn’t red versus blue. It’s “Bubba-ville” versus “Bubble-ville.” Huckabee makes it crystal clear that Bubble-ville’s inhabitants are America’s self-aggrandizing, out-of-touch coastal elitists who share President Obama’s notion that those who inhabit Bubba-ville are to be viewed as little more than “bitter clingers” for daring to enjoy their guns and their God as well as a down-home, family-oriented lifestyle that includes fried foods (gasp!) and the sharing of simple truths that more often than not elude the highly educated Ivy League types Huckabee takes exception with.

According to Huckabee, the principal divide between the two groups is the difference between a secular and religion-based approach to the world. “But as much as there is a great divide in this country between the ‘haves’ and the ‘have-nots,’ there is also a great chasm between the ‘believes and the believe- nots,’” Huckabee writes. “And increasingly the ‘believes’ in America have come to feel like cultural lepers—untouchable and undesirable—and an embarrassment to their fellow Americans who equate the holding of traditional views on marriage, religion, family, patriotism, and even the rule of law and the Constitution with ignorance and superstition.” He further posits the “snobbery and bold bigotry” of the believe-nots is further amplified by their self-designation as ‘mainstream.’”

Huckabee’s writing style is given to amusing comparisons, such as his contention the spinning wind turbines cherished by radical environmentalists “are a landscape-sized Cuisinart for birds and bats, slicing them faster than Ron Popeil.” He is also self-effacing, speaking about a boy first learning baseball, who, when told to “go home!” following a hit by his teammate, started crying, and said, “I can’t go home. My mother’s not here to take me home.”

The boy was Huckabee himself.

Each chapter of the book is dedicated to a different issue, and the chapter titles are self-explanatory. For example in Chapter 2, “Guns and Why We Have Them,” Huckabee derides those in Bubble-ville who view all firearm owners as “gun nuts.” And while he concedes that guns can be dangerous if handled improperly, he skewers those who are reflexively anti-gun with some apt comparisons. He notes the difference between fire in the hands of a cook versus a pyromaniac, that water can be used for bathing or drowning, scissors for opening a box or stabbing someone, and an airplane as an efficient means of traveling or a missile flown into buildings—even as he notes that he “doesn’t hear any suggestions that we ban fire, water, scissors or airplanes.”

In Chapter 11, “Reality-TV Culture,” he derides the “ugly stereotypes” of TV shows whose scripts are “at a level of sophistication a notch below cave paintings or Three Stooges movies” that have ultimately ended up “glorifying no-talents who were trying to outdo one another in selfish, gross, anti-social behavior.” He notes that there are some good examples of the genre (“Duck Dynasty” and “19 Kids and Counting”), but they are vastly outnumbered by shows that elevate “dumpster-diving, snuff-dipping, knuckle dragging dopes.”

Throughout the book, Huckabee reminds us that he came up from a relatively hard-scrabble existence. He speaks of a world where people made do with what they had minus any complaint, and whatever they lacked in terms of material wealth, as in “TV-advertised toys,” they made up for “with our imaginations.” He further notes the ability to improvise has stood him in good stead. “Rather than leading to material depravity and a deep despair over being a victim of poverty, my experience taught me to be resourceful,” he explains. And he is quick to compare the “helicopter parents,” who hover over their children’s lives and protect them from “every scrape bump and bruise,” to the “helicopter government,” aka “Uncle Sugar,” which is more than willing to embrace the same effort— at the staggering cost we have accumulated.

In the best chapter of the book, “Bailing Out the Big Guys,” Huckabee takes on members of both parties for their bailout of the banks during the 2008 financial meltdown. But he reserves a special animus for his fellow GOPers for their “abandonment” of principles and their cave in “to pressure from the biggest political donors who dug their own hole by turning Wall Street into the largest casino on the East Coast.” He recounts the “mind-numbing” size of the bailout and he castigates the political class for ignoring the devastation wrought upon millions of Americans who lost their nest eggs and/or their homes. He further notes that our descent into crony capitalism, where government picks winners and losers, “infuriates all Americans from Tea Partiers to the Occupy Wall Street crowd.” At the end of the chapter he offers his fellow Republicans some sage advice. “Don’t begrudge the underemployed family food stamps, and then justify bailouts for AIG, Goldman Sachs, and GM,” he warns. “The GOP’s problem isn’t that it’s too conservative. It’s convincing the masses and the majority that they aren’t invisible.”

Huckabee himself apparently intends to change the equation. On Jan. 3, the man who was the first member of his family to earn a high school diploma announced he was quitting his job at Fox to explore a 2016 presidential bid. “I’m not going to make a decision about running until late in the spring of 2015, but the continued chatter has put Fox News in a position that just isn’t fair to them,” Huckabee said on his show.

The Jan 20, 2015 release date of “God, Guns, Grits and Gravy” is likely no coincidence. The book is a highly entertaining read, but there is little doubt it is also a presidential platform, with Huckabee offering up his “down home” wisdom on most, if not all, the hot-button issues of the day. Whether a worldview best described as simple honesty still resonates remains to be seen. But as this book indicates, the nation could do a lot worse. The 2014 election was an indication of many things, and perhaps one of them was exasperation with the “Harvard faculty lounge” approach to governance revered in Bubble-ville. At the very least, “God, Guns, Grits and Gravy” demonstrates Mike Huckabee represents an alternative to that worldview.