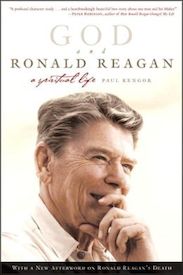 Americans have always been apprehensive about mixing politics and religion. It seems that we want our politicians to be religious, and specifically Christian, but not overbearing about it. Hence we view their spiritual lives with great suspicion, questioning either their sincerity or their independence.

This was particularly true for Ronald Reagan. “While he was president,” political scientist Paul Kengor notes in this new “spiritual biography,” “Reagan’s religious faith was, at best, dismissed or ridiculed.” But as Kengor establishes convincingly, the criticisms were dead wrong: Reagan’s belief in God “was a key source of his optimism and boldness, his daring and self- security, and his confidence; these essential intangibles carried him throughout his presidency—and career as a whole— and enabled him to achieve what he did.”

Kengor’s analysis of Reagan’s upbringing is particularly useful in understanding his spiritual life. Reagan’s father, an apathetic Catholic, left his sons’ religious edu- cation to their mother, Nelle, the most active member of the local Disciples of Christ evangelical church. The indefatigable Nelle gave religious readings, appeared in dramas, taught Sunday school, led discussions and prayer meetings, and aided the ill and the destitute. Neighbors considered her prayers to be so powerful that many believed she had the gift of supernatural healing.

Her son Ron became similarly active in the church and in prayer; many congregation members were convinced he was bound for the ministry. The family had changed residences frequently during his early years, however, and Reagan became something of a loner even in his relation- ship with God. During his early Holly- wood years, he seems not to have attended services very regularly, but Kengor quotes numerous people as being impressed by Reagan’s religious convictions at that time.

The author effectively disposes of the claims that Reagan was a devotee of astrology, and he very carefully explains Reagan’s “religious truancy”—his puzzling lack of church attendance while serving as president—by arguing that he was sincerely reluctant to distract congregations with a celebrity’s presence and large, intrusive security detail.

Certainly, prayer was central to Reagan’s life. He prayed often, both in public and in private. At the end of his acceptance speech at the 1980 Republican convention he said, apparently extemporaneously, “I’ll confess that I’ve been a little afraid to suggest what I’m going to suggest—I’m more afraid not to: that we begin our crusade joined together in a moment of silent prayer.” I still remember watching it on television and being impressed by his obvious sincerity.

Religious imagery and ideas were conspicuous in all of Reagan’s most important speeches, including the famous nationally televised address on behalf of Barry Gold- water in 1964, in which Reagan mentioned Moses and Israel and invoked the image of Christ on the cross. In speeches, conversations, and personal letters, Reagan showed great command of sophisticated arguments by such theologians as C. S. Lewis.

Kengor establishes that Reagan saw the presidency as a bully pulpit from which to promote a national religious renewal. In a 1983 interview, Reagan said, “What I have felt for a long time is that the people in this country were hungry for what you might call a spiritual revival. . . . I decided that if it was possible for me to help in that revival, I wanted to do that.” The author notes that Reagan often altered specific passages of proposed speeches “to con- form to his beliefs about the divinity of Christ,” and invoked Christ before secular audiences. “Such comments,” Kengor points out, “weren’t mere public attempts to appeal to religious conservative voters. In fact, they appear more often in Reagan’s private letters to everyday citizens than in his public speeches.”

As president, Reagan advanced some issues of concern to religious believers—arguing for prayer in public schools and against abortion on demand—but nothing changed in those areas. He did have success in applying his religious principles to economic matters, however, and he spoke out frequently against racial and religious prejudice (though he received little credit for this).

Of course, the greatest historical effect of Reagan’s religious beliefs was his relentless and ultimately effective opposition to Communism, which he detested especially for its Marxist godlessness. Kengor makes that battle central to his book. “During nearly every week of his presidency,” he notes, “Reagan blasted the USSR for its anti-religious stance.” The president kept the heat on the Soviets, most famously during his “Evil Empire” speech, and particularly on Gorbachev, whom he strongly suspected of being a “closet Christian.” “Hard-line Soviet Communists,” Kengor writes, “were perturbed by Reagan’s constant ‘God talk.’” This effort came at exactly the right time and had a tremendous effect. “Under Mikhail Gorbachev,” Kengor notes, “religious faith in the USSR began to flourish.”

Reagan saw all of this as part of a divine plan for America, and he characterized himself simply as “an instrument of God,” deflecting credit for the achievements of his administration. Longtime associate William Clark describes him in the book as “an amazingly humble person. True humility. There was no pride there at all.”

We Americans are undoubtedly right to be suspicious of politicians’ religious claims, but in Reagan’s case, as this book shows, there was more spiritual strength there than many of us thought: His faith in God helped propel events that truly changed the world for the better. Let’s see Karl Marx explain that.

Book Review from The National Review, by S.T. Karnick